Thanksgiving with a daughter’s twists 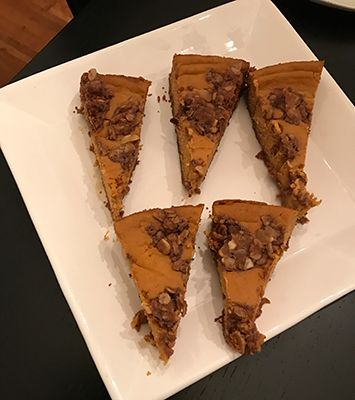 We did our Thanksgiving in Houston this year and let our daughter do most of the cooking. Some of you remember her doing articles when she traveled to some interesting places in the past. She is still a good cook and what a treat for my husband and me to let a child finally do the Thanksgiving meal. I guess we are getting somewhat older and thought it was about time.

Tinsley did not do a turkey, and knowing her I did not expect her to, but she did a roast duck with orange and ginger. This duck was delicious, but she realized how much fat a duck gives off (I could have told her that) and they are somewhat intensive in cooking. We did have to open the door to let out the smoke. The duck was marinated in grated ginger, orange zest, and garlic overnight. The glaze was honey, orange juice, Demerara sugar, ginger, and star anise. I would recommend doing the duck again since it really was tastier than a turkey. All her recipes came from the ‘New York Times’ except the one I am giving below if you are interested in the complete recipes.

Her sides included Hasselback Potato Gratin, (delicious since you cannot go wrong with cheese, cream and butter), Choriza dressing with leeks (also outstanding) and Ludo Lefebre’s Roasted-Carrot Salad. Now I know roasted carrots are good for you but this was the least tasty dish on the table. It looked fancy with a blood-orange vinaigrette and a cumin crème fraîche dip but I believe the carrots were the problem. They were from Whole Foods but rather large and probably not so fresh. I probably said way too much about how tasteless the dish was, since I found out later her husband had chosen the dish and helped prepare it. Oh well! Can’t win them all.

My contribution to the table was my famous scalloped oysters (done for 42 years) and I did Vivian Howard’s Pumpkin Chai Cheesecake for dessert. My son-in-law loves cheesecake so maybe that made up for my talking badly about his carrots. The cheesecake was good and I probably would do it again, but will save the recipe for next Thanksgiving. My husband likes cheesecake but he said he was through with pumpkin for Thanksgiving, as well as sweet-sweetpotatoes and there are better meats than turkey he said.

The one dish that I thought was exceptional was not from the ‘New York Times’ but from the cookbook ‘Garden and Gun’ published last year, with a collection of the recipes from their magazine. I gave Tinsley the cookbook for her birthday in August and she did this recipe from the book for Thanksgiving. It is worth repeating any time of the year. It is greens with bacon jam. Now, I just did not want her to forget her Southern roots.

From the Southerner’s Cookbook, ‘Garden and Gun’ recipes.

2 pounds mixed greens, such as mustard, chard, kale, and spinach, and to be sure collards.

Submerge the greens in a large container of water to rinse, remove any large stems, and rip leaves into bite-size pieces if necessary. Drain the greens and blot any excess moisture with a clean kitchen towel. Place a large cast-iron skillet over medium-high heat, add the Bacon Jam and cook until melted, 2 to 3 minutes. Add the greens, increase the heat to high, and toss frequently with tongs until the greens just start to wilt and before they release too much liquid. Season with salt and pepper to taste. Garnish as desired and serve immediately.

1 pound applewood-smoked bacon, diced (I bet it would be better with Benton’s)

1/3 cup bourbon (Do you have any Connecuh Ridge? It is the Alabama state whiskey [2004] and now to be distilled and bottled in Troy.)

Cook the bacon in a cast iron skillet over medium–high heat, turning occasionally, until the fat has rendered, and the bacon just starts to turn golden, 4 to 5 minutes. Add the onion, reduce the heat to low, and cook until the onion is tender, 8 to 10 minutes. Add the bourbon, vinegar, brown sugar, mustard, and simmer until thickened, about 20 minutes. Refrigerate until ready to use.

This makes a lot of bacon jam so you could reduce this by cutting the recipe in half.