Kiwanis honors Glover as citizen of year [with awards gallery] 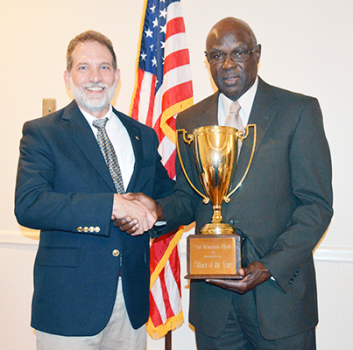 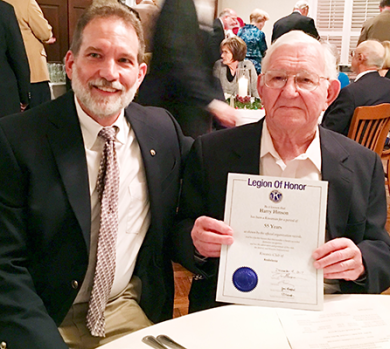 Kiwanians were recognized in the Legion of Honor on Monday night. Harry Hinson, shown with Kiwanis President Tim Mersmann, has served the Kiwanis Club for 55 years. 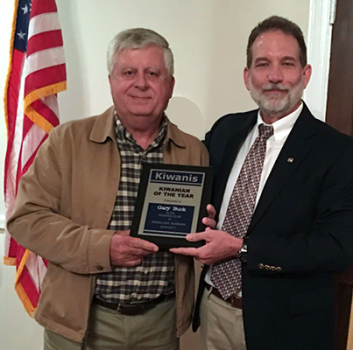 Gary Buck was awarded the Kiwanian of the Year award. Mersmann said that Buck always volunteers at events where there needs to be someone present such as the kids fishing derby, banquet, and other Kiwanis events and he’s the go-to tech guy. 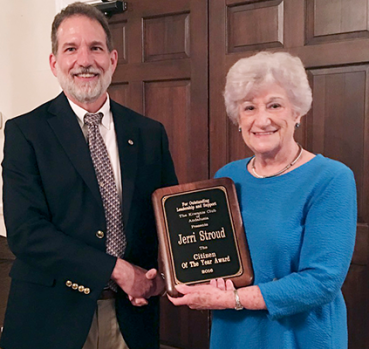 Jerri Stroud was presented a plaque for being the 2016 Citizen of the Year. She is shown with President Tim Mersmann. The citizen of the year keeps the club’s trophy for year, then receives a plaque.

Henry Ford once said “to do more for the world than the world does for you – that is success.”

Anyone who knows Sammy Glover knows that he’s a giver. He’s contributed to the community in many ways.

His giving back earned him the distinction of Citizen of the Year at last night’s Kiwanis Club Banquet.

Kiwanis Club President Tim Mersmann said that Glover was chosen out of a “very impressive and competitive set of nominations, any of whom would do great honor to this award.”

Glover is a long-time Andalusia resident who has served the community in a variety of role.

“Our citizen of the year is a veteran who served our country in Vietnam and continues to work for support and recognition of veterans,” Mersmann said. “He has been one of a few primary organizers of a 2015 effort to take World War II veterans from Covington County to Eglin Air Force in 2015 for recognition at the 70th anniversary of the end of World War II. He was one of a small group to successfully lobby for designation of a Veteran’s Memorial Highway here in Andalusia, and he supports individual veterans with transportation and other forms of assistance.”

Glover has also served on the Andalusia Board of Education, board of registrars for 16 years, Andalusia Housing Authority, American Red Cross board and Andalusia Health board of trustees, and is on the Southeast Alabama Regional Planning and Development Commission.

He’s a long-time Andalusia Lion and is a supporter of high school athletics.

Glover was described by his peers as “a diplomat,” “a quiet, yet impactful leader who gives selflessly to worthy causes,” “a leader ahead of his time,” “ a role model.”

“He is known as a worker, one who is equally comfortable pulling the plow as he is steering it. He will do whatever it takes to get the desired outcome.”

“We know from significance of the changes over time in our community that he experienced many years that were not easy,” Mersmann said. “He has weathered hard times without becoming hard, has endured indignities with dignity, and gives generously without concern for what he gets. Our citizen of the year is admirable and worthy of honor not only because of what he has accomplished and continues to accomplish for our community, but also because of his strength of character, because of who he is.”

Accepting the award, Glover said he believes that “The Good Lord expects us to leave this place better than we found it.”