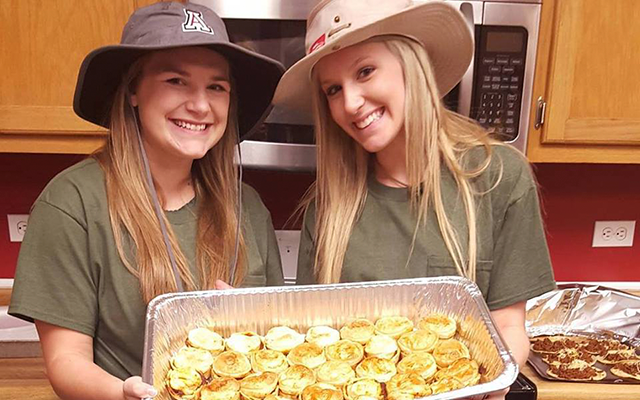 Brooke Mancil and Skylar York show off their Australian dish.

German Bratwurst, Canadian Tourtere, Italian canoli, and Australian Meat Pie aren’t typical meal choices for local teenagers, but a group of Andalusia High School students tried those and many other dishes as part of an international foods tour in Jana Clark’s family and consumer science classes.

Clark said the students worked with partners and began by researching different cultures. Their assignments included making an oral presentation about the country using PowerPoint, dressing culturally, preparing a dish from the country they chose, and submitting their recipe.

The recipes will be compiled in a book of the class’s recipes at the end of the year, Clark said.

The most unusual thing he learned, he was, was about a traditional Scottish dish made from lamb’s stomach. That wasn’t the dish he chose to prepare.

“We served Scottish shortbread,” he said. “It made it. It’s bland, but sweet.”

Campbell was looking forward to sampling a Nicaraguan cake.

“It’s really, really sweet, with a milk icing,” he said.

Brady Jernigan said his favorite new dish was canoli, although he also enjoyed the Australian meat pie. In addition to foods, he said, he and his partner also researched holidays and sports.

Clark said her classes complete the international foods unit each year, and always enjoy it.