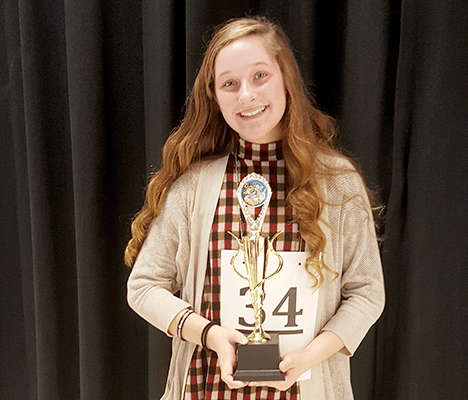 Andalusia Elementary School’s Ava Tomberlin put her spelling skills on display as she took home first place in the AES’s Spelling Bee for the second year in a row.

The Spelling Bee features class winners from the fourth, fifth and sixth grades.

Tomberlin finished second as a fourth grader and has won the title the last two years.

“It feels amazing,” Tomberlin said after the win. “I’m in shock almost.”

To get into the final round, Tomberlin successfully spelled “pièce de résistance” and then claimed the top spot with a successful spelling of “anecdote.”

“That was a word that my mom and I studied,” Tomberlin said of pièce de résistance. “We studied nearly every night of the week. I really enjoy spelling.”