Chambers was elected sheriff in 1978, and served one term. 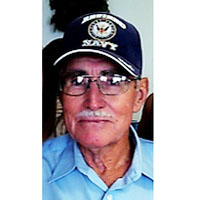 He was born Jan. 7, 1928, in Florala to Arrie Chambers and Gladys Justice Chambers. He joined the U.S. Navy and served for 23 years. After retiring from the Navy he worked at McDaniel Motor Company as a service manger.

He then worked as deputy for the Covington County sheriff’s department and was later elected sheriff. He worked civil service at Eglin Air Force Base for years and then with the Conecuh Forestry Service, retiring at the age of 87.

When he wasn’t working his full time jobs, he was hard at work on the farm that he loved.

He was an active member of Damacus Baptist Church and a devoted father, grandfather and great grandfather.

He is survived by his daughters, Suzanne Chambers Hunt (Will), Autumn Chambers Jones (Anthony) and Aaron Chambers Norman (Chase), all of Florala, and Brittney Cox (Andrew) of Laurel Hill; sons, Foy Chambers, Joseph Chambers (Jeannie) of Panama City and David Chambers of Lakeland; sister, Margie Watson of Pensacola. He is also survived by 11 grandchildren and numerous great-grandchildren.

Visitation will be from 6 until 8 p.m. Friday at Evans Funeral Home. Interment will be in the Damacus Baptist Church Cemetery with full military honors.