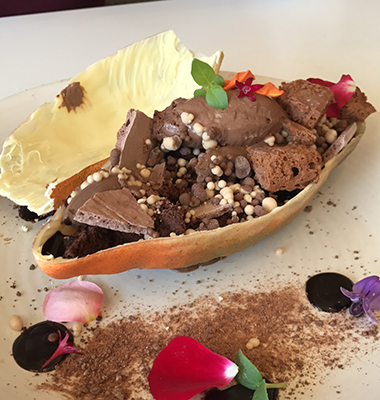 I cannot finish my writing on Houston until I tell you about two new restaurants that we visited over Thanksgiving.

One Fifth is the follow-up to the James Beard Award winner’s highly successful Underbelly a few blocks away. I have written about Underbelly and thought it was very good. Chris Shepherd is the creative chef behind these restaurants. His idea was to change the concept of the restaurant every year for five years and therefore the name One Fifth. He is on his second year. The first year was a steakhouse, and the second is Romantic languages, therefore French, Italian and Spanish cuisine.

The restaurant is housed in a 1927 brick church, formerly Mark’s American Cuisine, the design of the 158-seat space has been tweaked for Romance languages though the set-up is the same with seating in the main dining room area, upstairs in the choir loft, and at both the main and raw bars.

As for the food? There are some good and bad, I think.

The a la carte menu is separated into courses. There were appetizers such as a Spain-inspired potato tortilla graced with caviar, charred octopus with chickpeas, and a beyond rich snail pot pie. We did order the octopus (which I thought was rather chewy, but my husband liked it) and I really liked the snail pot pie and decided to come home and do some Escargot en Croute. I had not done escargot in years.

Next comes the pasta course and we chose duck heart bolognese with whipped ricotta. We did not order the entrees since I thought $55 for small bites of venison was a little overpriced and the Suckling Pig Presse did not appeal to me.

It is one of those restaurants which you can say I am glad I went but do not plan on going back. There are too many great ones in Houston.

The next restaurant which I think is outstanding is Xochi. We went for lunch on Friday after Thanksgiving and it is also owned by a James Beard Award winner, Hugo Ortego. He is the owner of Hugo’s which I have also talked about and thought was delicious. This restaurant has been opened for 11 months and is called Houston’s finest new restaurant.

Xochi, pronounced so-chee, comes from Xochitl meaning flower, to catch fire, to bloom or blossom, from the Aztec language Nahuatl. This is Oaxacan cuisine at its best. There are tlayudas (Mexican pizza), moles, wood roasted oysters and best all desserts that will make you swoon.

We wanted to try everything and thought we ordered so much food—but we ate it all. We had little black-masa tacos, one with goat on it and another with pork belly. They are small but just beautifully presented. We had a tlayuda but the masa disk is toasted, Oaxaca style, rather than fried. The pizza is covered with the stretchy white Oaxacan cheese, quesillo, which is made in-house. My husband had a grilled shrimp with corn pudding (kinda like shrimp and grits). We had wood-fired oysters which were some of the best I have had.

Hugo’s brother, Ruben Ortega, is the pastry chef. He uses chocolate in all its forms, it is roasted and ground on the premises. Perhaps the tour de force of the meal is Ruben Ortega’s big white chocolate cocoa pod lavished with many-textured chocolate foams and crumbles. It is a huge dessert and goes for $18, but beautiful and delicious.

You will not be disappointed with this restaurant. It is located inside the Marriott Marquis Hotel on Walker Street and you can have valet parking for $6. The prices are very reasonable and I felt like I had one of the best meals I had had in a long time, and I eat out a lot!!

I did get inspired to do the Escargot en Croute and found it interesting that is was hard to find snails in some of the stores. I was in Wilmington and could not find any at the Harris Teeter (now Kroger) nor Whole Foods. They had stopped carrying them because of low sales. I did find some frozen at the Saigon Market but later found some cans at the Fresh Market and they also carry them frozen. I guess they are just not as popular as they once were. Anyway, they were good and we enjoyed eating them and they were very cheap eating compared to One Fifth.

For Butter Mixture: Whip butter in mixing bowl. Add the next nine ingredients with salt and pepper, and mix well. Set aside.

Place six snails in each oven proof dish with their liquid, and cover with two or three tablespoons of the butter mixture. Place a sheet of the puff pastry over each dish. Trim dough and seal around edge of dish. Beat egg with water and use to brush dough. Chill until ready to bake, at least 20 minutes.

Preheat oven to 375 degrees F. Bake until pastry rises and is golden, about 20 to 30 minutes. Remaining butter can be refrigerated up to two weeks and used when garlic butter is needed.

This is a lot of butter but I use grass-fed and I saw on the can of snails that they are 20 percent protein. I guess that makes me feel somewhat better!