Remember When: ‘A dream city’ 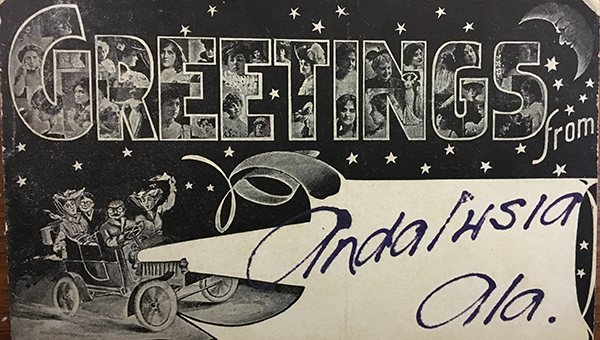 A Christmas postcard from Andalusia.

1949 was a good post World War II year in the life of Andalusians especially with a new “Cancer Awareness” program becoming more intense led by Attorney Ed Reid who was a cancer survivor himself.

November 24, 1949 – From The Andalusia Star News – “Dr. Alton Oshsner, internationally famed surgeon from New Orleans and president of the American Cancer Society, will come to Andalusia and Covington County on the invitation of members of the Parnassus Club who have placed the fight on cancer at the top of their health projects for the year.”

“A public meeting in the courthouse at which Dr. Oschsner will be the principal speaker will be staged at 7:30 p.m. on Friday night, December 16. Governor James E. Folsom, U. S. Senators Lister Hill and John Sparkman and Congressman George Grant are invited.”

“A buffet supper will be helped by the Parnassus Club on Thursday evening, December 15, at the Andalusia Country Club in honor of Dr. Oshsner.”

“Club members are arranging address schedules for Dr. Oshsner at schools and via radio during his visit to Andalusia. It has also been announced that Mrs. J. D. Henderson has offered to make her palatial home on East Three Notch Street as ‘Cancer Headquarters’ during Dr. Oshsner’s visit.”(This is the 3-story home across from the present First Baptist Church.)

“Nowhere in the nation has the fight for cancer been so constructive nor so far-reaching as in Covington County,” Dr. Oshsner stated in his tribute to Parnassus Club members and local leaders who are responsible for the success of the program here. He further announced that the upcoming slogan for 1950 will be “STRIKE BACK AT CANCER.”

Making his departure of the city, Oshsner concluded his remarks by saying, “Never in my medical career have I witnessed so many persons wanting to help their fellow man as here!” This is so true even today with generous citizens, schools, churches, neighbors, and the local Meredith’s Miracles organization helping victims of cancer stepping up in sacrificial ways to help those suffering with the dread disease still prevalent all these years later. Thankfully, it is much more treatable today than in 1949.

I will add to this history by noting that a beautiful scrapbook was compiled by Attorney Ed Reid’s wife, Gladys Mathews Reid, a member of the Parnassus Club. The keepsake album designed with a heavy wooden cover was preserved, housed,   and displayed in the Andalusia Public Library all these years. It featured many photos of Andalusia in 1949 and information about the club’s activities that year promoting cancer awareness including early detection and the 7 danger signals of cancer. The scrapbook, a real treasure, has recently gone missing. If anyone knows of its whereabouts, please contact Linda Grimes Harrell, genealogy room archivist.

December 1, 1949 – “It costs 2 cents to mail cards for Christmas. Don’t try to mail your Christmas cards this year with 1 ½ cents, Postmaster Luther Brown warned today. To preserve your cheery Christmas cards from the indignity of being returned, the Postmaster recommends sending them all by first class mail with a 3-cent stamp so your warm-hearted Christmas greetings won’t land in the Dead Letter Office!”

“Fire alarms answered during the month of November set a new 1949 record. A total of 25 calls, most of them grass fires, were answered by the city department, Fire Chief Roy Gardner has revealed.”

“To assist Andalusia further with the completion of its airport, the Alabama Department of Aeronautics has made an additional state grant for the construction of the new administration building (at Sanford) and other necessary items of expense including land easements.”

“The American Legion Auxiliary honored its 14 Gold Star Mothers last week with a tea at the Legion Hall.” (I guess that all of those World War I and II Gold Star mothers have passed away by now. There are probably other Gold Star mothers from later wars in our community. How are we honoring them?)

“Santa To Lead Christmas Parade Into Andalusia On December 14 – On Santa’s arrival, the AHS school band will proceed down East Three Notch Street to the City Square, down South Three Notch Street across Baker Street, up South Cotton Street, and back to a platform in front of the Courthouse. There will be a master mailbox at City Square for letter deposits from the kiddies designating what they want in their stockings on the morning of December 25. The home decoration program will include a $10.00 reward for the best decorated residence; $7.50 for 2nd prize; and a $5.00 3rd prize.”

“Watson’s – On the Square – Buy Useful Gifts for Christmas Beginning December 1st Ending December 24th – Many prices will be marked down to rock-bottom on useful gifts for any member of the family. Ladies’ Dresses – $3.95 to $8.50”

“’Big Boy’ (Little) Carries Torch As Andy Hi Seniors Play Star Roles in Skunking Bobcats 20 – 0 Shutout in the Final Game of the Year – 14 Andy Hi seniors closed out their high school careers in a ‘blaze of glory.’ More than 4,000 persons were in the stands.”

“AHS Band Concert Set for December 15 in the Andy Hi Gym. Bandmaster Dan Hanna will direct the band in their winter concert.”

December 15, 1949 – “The Church Street Grammar School stage was the setting of a scene of great dignity when 100 children wearing white robes and black ties under the direction of Mrs. H. M. (Carma Lou) McInnish presented a cantata, ‘The Wondrous Story.’ Mrs. Lillian Smyly accompanied the performance.”

“The Christmas motif was carried out at the annual father-son mother-daughter banquet of the Straughn School FFA with Christmas wreaths, trees, and decorations cloaking the dining hall. Faye McBryde, president of the FHA, spoke on ‘Our challenges as future homemakers toward peace and good will to men.’ Others who contributed to the program were Gene Baisden, Bellaire Krudop, A. D. Barton, school trustee, and Charles Gunter.”

“A lot, 75 X 100 feet, situated at the corner of Packer Street and Robinson Avenue has been donated to the West Highland Baptist Church by Miss Maggie Mae Robinson and Mrs. Kate R. (J. D.) Henderson, church officials announced. On the site, it is planned to erect a pastorium in the (near) future.”

“Children of the Gables Apartments will be guests at a Christmas tree ceremony on Saturday night, Mrs. Tom Ellis (known affectionately as ‘Mom Ellis’) has announced. An outdoor tree will be lighted at the apartment development according to Mrs. Ellis who said a real life Santa Claus will be present to have the youngsters tell him in person what they are expecting in their stockings on Xmas morning.”

The Gables Apartments were new in the late 1940s. A lot of young couples who had moved to town after the war resided at the popular Gables Apartments in that period of time. That included school teachers and young businessmen and their families who later built homes in the new neighborhoods springing up.

“Covington Electronics – ABSOLUTELY FREE Radio Tune-Up – Those Christmas programs will be more enjoyable to you and your loved ones if you will drop by and let us tune-up your radio. Phone 192. South 3-Notch St.”

An Ed Dannelly editorial in the December 1949 Andalusia Star-News brought tears to my eyes about our beloved Andalusia. A portion of it reads, “Once Upon a Time, there was a town. It was not a great big city, but it was not a mere village either. The folks in the town were hustlers and at least 95 per cent loved to read news items about themselves and their neighbors….Of course, just about every day in this town was really Christmas, and the little ‘dream city’ was blessed with a goodly number of people with sense enough to realize this. There were even some who would give a little time down on their knees to telegraph UP ABOVE for the fine things that had been bestowed on them.”

Yes, we should all REMEMBER WHEN Andalusia was described as “DREAM CITY” in 1949 as I discovered when I perused The Andalusia Star News archives at the newspaper office. It still is!

Sue Bass Wilson (AHS Class of ’65) is a local real estate broker and long-time member of the Covington Historical Society. She can be reached at suebwilson@andycable.com.