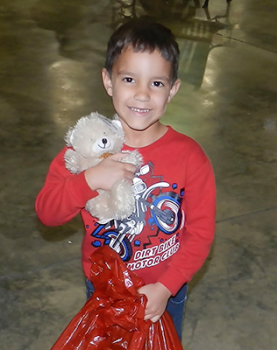 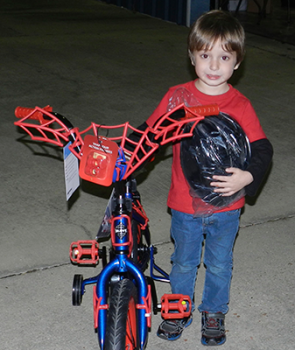 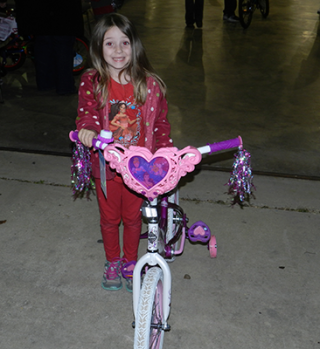 Maiyah Mills shows off her bike. 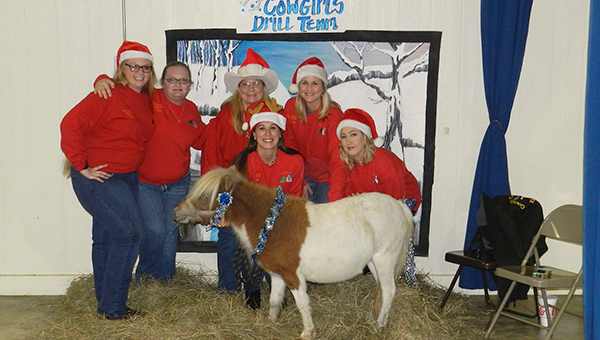 The Covington Cowgirls brought a Shetland pony, because what kid doesn’t want a pony for Christmas?

Parents and their children lined the entrance of the Kiwanis building at 6 Friday night to receive gifts that the community donated through Community Christmas.

Jim Krudop, topped with a Santa hat, hosted the night’s events with cheerful talk about the story of Christmas. Dozens of children waited restlessly to get their presents, as students of the Andalusia Ballet performed part of The Nutcracker.

Director Meryanne Murphy narrated the story of The Nutcracker while the ballerinas danced behind her.

After the dancers had exited the stage, Krudop started whispering about how Santa was about to make his big arrival, then out came Santa with cheers from the children in the background.

Santa and the many gifts were not the only reason that these kids were excited to be there. The Community Christmas non-profit organization gives away bicycles every year. This year, 140 kids got to take home a bike. Easton Scott, William Turner and Maiyah Williams were a few of the lucky children taking home a bike.

Another big part of Community Christmas is the Andalusia Pilot Club’s donation of bike helmets for all of those receiving bicycles.

Krudop said, “The Pilot Club has really helped out a lot in making it easily accessible for these kids to get the protection that they need when riding these bikes we give away. Since the Pilot Club focuses on brain safety we cannot thank them enough for their generous contribution.”

Many of the kids were very excited and grateful to be taking home a bike.

Chase McElhaney, one of the kids who received a bike, exclaimed, “Thank you, Jesus!” when walking away with his his.

“A lot of these kids wouldn’t be able to even have a Christmas if it weren’t for this project and the people that donate the gifts,” Archie Shakespeare said. “It makes me very happy that we can make their Christmas by doing this,”

This marked Shakespeare’s 11th year working with this project and he said, “Today is one of the biggest days of the year! Thankfully this year it was much cleaner and better organized.”