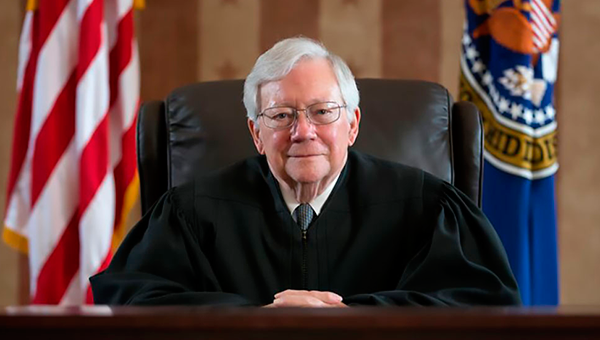 Harold Albritton’s earliest memories of the Covington County Courthouse are from his childhood, when his father and two uncles were practicing law.

“I can vaguely remember going with my father over there to watch court,” Albritton, now a U.S. District Court Judge for the Middle District of Alabama. “I remember going up and down the steps.”

Tuesday, Judge Albritton will be the keynote speaker at a ceremony commemorating the 100th anniversary of the Covington County Courthouse. The event is set for 10 a.m., and the public is invited.

Albritton said he remembers watching his father in court as a teenager, and things that happened in and around the courthouse.

“I have a memory of a preacher on the front steps wearing black clothes, shaking a Bible in his fist, and regaling everybody with fire and brimstone,” he said.

In those teen years, he said, he thought he’d grow up to be a journalist.

“The law wasn’t expected of me, and I wasn’t pushed by my father to do it,” he said. “When I was a senior in high school, I really had in mind going into journalism.”

As a high school sophomore, Albritton started working at The Star-News for longtime editor Ed Danelly.

“My first byline was a meeting of the electric cooperative. It was quite an experience,” he said.

He worked afternoons and summers. The job was not without its perks.

“One summer I went to the National Boy Scout jamboree in Valley Forge, Penn.,” he recalled. “My press credentials from The Star-News let me get in behind the scenes, and I got to meet Bob Hope.”

As an undergraduate at the University of Alabama, Albritton worked at The Crimson White, but soon lost interest in journalism and moved toward a career in law. He is a 1960 graduate of the University of Alabama School of Law, and from 1962 until 1991, was the fourth generation of his family practicing law in the Andalusia firm established by his great-grandfather, Edgar T. Albritton, in 1887. The Albritton firm was the oldest law firm in continuance existence when it was closed by the fifth generation in 2015.

President George H.W. Bush nominated Albritton to the U.S. District Court in 1991. Albritton was chief judge from 1998 until 2004, when he assumed senior status.

Judge Albritton also is a former president of the Alabama State Bar.

He and his wife, Jane, have three sons, Hal, Ben and Tom, all of whom are attorneys. They also have six grandchildren and two great-grandchildren. He is most pleased that one of his grandchildren is preparing to enroll in law school.