Remember when: The embarking of Andalusia prosperity 100 years ago 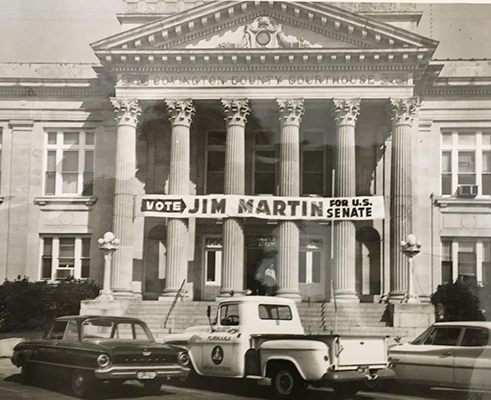 This photograph of the Covington County Courthouse was taken during Congressman Jim Martin’s U.S. Senate Race against Sen. Lister Hill, circa 1962. Martin died earlier this year at age 99.

It is so inspiring to read the headlines and news stories in the old Andalusia Star-News one hundred years ago. The newspapers on microfilm at the Andalusia Public Library are not easily legible so I know that a lot that could be read cannot be read. Here are some portions of some articles that might interest you readers beginning in 1916.

“Facilities for Prosperity are Bountiful in Covington County – The population of Andalusia, the country seat of Covington increased from 552 in 1900 to 4,000 in 1915. Covington County offers every advantage for pleasant and profitable citizenship.”

May 2, 1916 – “A mule hitched to a buggy occupied by two men livened things up on a portion of the residence section of East Three Notch Street Saturday afternoon. One man was turned out after one of the wheels gave way, and after a vain attempt to hold the mule, the other man jumped from the almost demolished buggy. The mule ran up on Dr. and Mrs. L. E. Broughton’s lawn and from there into the back yard where he stopped. Neither man was hurt, but the buggy and harness were torn up. Packages including a large amount of seeds purchased in Andalusia to carry to their homes in the rural districts were strewn over the Broughton lawn.”

May 30, 1916 – “Corsett Fittings in Moving Pictures – Special Matinee for Ladies Only at the Royal Theatre – 2 p.m. June 7. I. Berman has engaged the Royal Theatre for this special showing of Gossard Corsetts on living figures.”

“Help Keep Andalusia Clean – This drive is conducted by the Civic League.”

“Coca-Cola – 5 Cents – No ballgame is really complete without Coca-Cola. Bottled by the Coca-Cola Bottling Co. of Andalusia.”

It seems that a Progress Edition of the newspaper appeared on December 19, 1916. I have been searching the newspaper archives for more information of the building of the new Covington County courthouse, the county’s 5th courthouse. Somewhere between the end of 1915 and early 1916, Editor Edward Doty retired and moved to Tuscaloosa, “a growing town,” to do newspaper work there. Oscar M. Duggar took his place. Upon the arrival of Mr. and Mrs. Duggar, they both became very civic minded citizens. Their names appear in many facets of Andalusia life for the next 30 plus years.

I remember growing up attending the First Presbyterian Church. A certain room was designated “Mrs. Duggar’s (Sunday School) room.” Later opened up and made a part of the congregation, massive doors were removed and pews were added for additional seating for church services. Central heating and air was installed to replace the gas heater once warming the Duggar room in a setting which magnificent stained glass windows adorned the west side. The room was not needed for Sunday School after the two-story brick addition was built in the early 1950s. Presbyterians, correct me if I am wrong about any of those facts. I admit to some glitches on occasions when I REMEMBER WHEN. I don’t mind being corrected!

December 15, 1916 – “Andalusia’s Community Christmas is the topic of interest. Fraternal and religious organizations, social clubs, businessmen, women and children are all taking a keen interest in the Community Christmas. The services to be held about this tree are to be sacred services. Good order will be maintained. We speak for the people who are to be present on this occasion on the same good behavior as would be observed in any church service. The Andalusia Brass Band will provide all the music. Rev. A. J. Preston and Rev. J. E. McCann will give 5-minute talks on ‘The Meaning of Christmas.’ The event is scheduled for Sunday, December 21, 5:30 p. m.”

Dr. Preston was the father of Inez Preston Riley, wife of John D. Riley, Andalusia real estate developer. Granddaughter Peggy Riley Graves once donated Dr. Preston’s lap robe to the Three Notch Museum. He as a pastor was a pillar of the First Baptist Church in those old days. I remember that Dr. Preston’s library in the grand Riley house there on East Three Notch Street was quite a valuable source for the young Baptist minister Bob Marsh’s use in studying those volumes of books enabling him to earn his seminary doctorate degree in the early 1960s.

I remember my mother Marge Brunson Bass telling me when she and her wonderful friend Peggy Riley Graves would double-date during those early World War II years, Inez Riley, Peggy’s mother, would tell the two-some, “Now girls, be in before midnight. The devil walks after midnight!” And they usually did abide by her directions!

December 17, 1917 – “The Andalusia City Band will give a novelty concert Friday night at the Royal Theatre in order to raise funds to pay off the indebtedness of their instruments. There will be quartets, solos, string music, violin solos, and the musical bottles!”

This drug store was located where Attorney Mike Jones office on Court Square is situated today. When Mike purchased this building a few years ago, I remember his finding a treasure trove of old medicine bottles and other memorabilia even from the later occupant, O’Neal Drug Store, in the basement.

When the M. E. Brunson family moved to Andalusia in 1899 by mule and wagon, they pulled up and stopped at Brown & Broughton to get water for one of their sick children. When my maternal grandparents, Charlie and Foye Brunson, were wed in 1917, they went to Brown & Broughton to enjoy chocolate malts! Their family wedding had been held at the Brunson (City) Hotel down the street on South Cotton where Alan Cotton’s Florist Shop is located now. They were married for 54 years!

“The Andalusia Motor Co. – Home of the Ford, Always on the Job.”

“Sessoms Grocery Store – One of the Largest Wholesale Grocery Houses in South Alabama.”

“J. M. Taylor’s Auto Shop – A Leader in Its Line and Thoroughly Equipped.”

“Patrick Hardware Co. – One of the Leading Hardware Firms in Covington County.” (The Patricks later went into the furniture business.)

“Brunson’s Bakery – The Leading Bakery Firm of this City.”

From what I have read in researching the details of the building of the courthouse, the structure designed by the renowned architect Frank Lockwood was mostly completed in late 1916, but in working on the completion of the interior, a fire in March of 1917 resulted in the final completion in July 1917.

“Construction wrapped up within four months,” the account reads in the preserved minutes in the records at the County Administration Building.

Editor Duggar wrote a long list in the December 1917 edition titled “WHAT ANDALUSIA HAS.” That amazing list of accomplishments included “a $110,000. stone courthouse.” The list is all inclusive, lengthy, and impressive to see just how far Andalusia businesses had come since the railroad line was extended and the trains came at the turn of the century, less than 20 years before.

Duggar summarized the progress of the business, civic, social, and religious community by stating, “Andalusia has a warm welcome for good citizens who stand ready to help anyone who desires to come here and embark in business.”

Say it isn’t still so today! Thank you, readers, for your compliments of this REMEMBER WHEN column. Let’s all turn out this coming Tuesday morning at 10:00 a. m. at the Covington County Courthouse for the 100th anniversary celebration of the construction of this awesome landmark where legal business has thrived for all these years. See you there! (But remember, don’t spit on the steps!)