Martha Dixon was witness to a century 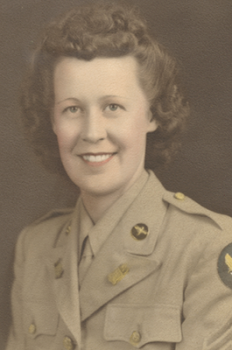 Mrs. Dixon served in the military during World War II. In a 2015 interview, she said as she awaited her assignment, she held her breathe hoping she would note be asked to cook.

Editor’s note: This interview with Martha Dixon was done for our lifestyles magazine, South Alabama Living, in the summer of 2015, weeks before she celebrated her 100th birthday. We shared it again this week as friends mourned her passing on Sat., Dec. 16, 2017, at 102.

The bookends of Martha Dixon’s life are mismatched.

“I grew up so poor, we couldn’t afford fun,” she said. In contrast, she’s spent her latter years literally giving money away – working to improve the lives of others.

Times were hard in Covington County in 1930, when Martha Belvin left school at 15, and went to work, first in the local Alatex, then in a Columbus, Ga., cotton mill.

It was while she was in Beaumont, Texas, with an aunt that she decided to join the military.

The country had issued a call to women to serve in office and clerical jobs, as well as many combat-support roles, to free men to fight.

“They sent a train across the United States to pick up women,” Mrs. Dixon recalled. “I was in Beaumont, and the train was coming through Houston. I was afraid I wouldn’t get there.”

But she did catch the train, with only the knowledge that the train was headed to Chattanooga. Beyond that, she had no idea what would happen.

Over a period of several weeks, the female volunteers were interviewed and placed accordingly in jobs.

“When they called out names for jobs, I just held my breath. I didn’t want them to put me in a kitchen,” she laughed.

Any job would have been better than cooking, she said.

Instead, she trained at Ft. Benning, and later was stationed at the Pentagon as a member of the WACS, where she and countless other women monitored the weather, and provided forecasts to ships at sea and American airmen all over the world.

“We worked shift work, around the clock,” she said. She and her co-workers took information from teletypes and plotting the weather reports on maps.

She and her co-workers lived in barracks across the Potomac, and took a boat to work, except in the coldest months of the year when the river was frozen.

After three years, the war ended.

“I liked it, but they didn’t need us anymore,” she said of her military service.

So she came home to Andalusia to care for her ailing mother, finished high school, earned herself a business degree, and went back to work for Alatex, first as a filing clerk and later as a payroll clerk. Eventually, she married, and her then-husband’s work took them to Mobile. No sooner were they settled there than he landed a job at the employment office in Andalusia.

“We came back to Andalusia, and I’ve been here ever since,” she said.

She was widowed when her husband died suddenly of a heart attack.

She had known Solon and Ellie Dixon a long time before Ellie Dixon died in 1971, she said.

“He was lost without her,” she said. “Our friends encouraged me to go by there and cheer him up, get him to go places.”

In 1976, at the encouragement of the Methodist minister, the two were married in a chapel at Huntingdon College.

In 1978, Solon and his brother, Charles, sold the majority of the family’s timber ventures, which at its peak included sawmills, turpentine stills, gristmills, farms and more.

“There was nobody in the family to run it,” Mrs. Dixon recalled.

She worked with her husband to put together the acreage for Auburn University’s Solon Dixon Forestry Center.

On Dec. 15, 1978, the Dixons presented Auburn University a deed for 80 acres and a check for $500,000 to begin the construction of the Solon Dixon Forestry Education Center.

“That was something Solon had always wanted to do,” she said.

Once that was done, the Dixons formed a foundation in 1980.

“And that has taken the rest of my life,” she said.

With the help of investment experts, the foundation’s corpus started to grow. Now, through the foundation, the woman who grew up too poor to have fun has been able to improve and enhance countless lives.

“Solon always wanted to help those people who had worked for the business,” she said. “I tried to do what he wanted to, and it’s nice that it has increased as much as it has. He would really be surprised.”

The Solon Dixon Forestry Education Center continues to benefit from the foundation, as does Auburn University. Beyond that, the Dixon Foundation has supported the arts, health organizations, education, and countless other causes.

Don’t think for a moment, the business of running a foundation is pure fun.

“I’ve worked all of my life until very recently,” Mrs. Dixon said. “I was glad when Doris Tyler came along, and she could help me with the foundation.”

Tyler had worked in the Dixon companies, and was familiar with the timber industry, Mrs. Dixon said.

Weeks away from her 100th birthday, she was asked if she ever expected to live this long. In a word?

At 99, she follows current events closely, and is up on the politics of the day.

She says there are no secrets to living a long life, but her companion and caregiver, Mary Ann Lewis, says otherwise.

“Martha always says, ‘I bloom where I am planted.’ ”