Looking ahead to 2018: Leaders predict finished projects, focus on jobs 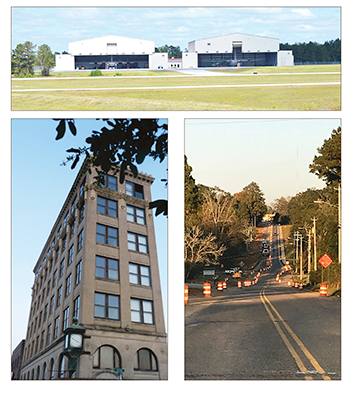 A regional focus on economic development, working to close the deal on potential projects that could mean jobs for local residents, and moving forward – and to closure – on construction projects currently underway, and some expected to start in the near future … those are among the things local officials expect in 2018.

“In Andalusia, you will see us finishing the South Three Notch Street project, as well as the sidewalk project on Stanley Avenue and Lindsey Bridge Road,” Andalusia Mayor Earl Johnson said. “You will also see us starting and completing the projects at the Andalusia High School auditorium and stadium and the environs thereabout.”

Construction on the $8.6 million South Three Notch Street project began in November of 2016. It was funded by a 2013 ATRIP grant which required a $2.1 million local match.

Phase VI and VII of the roadway reconstruction began in December of 2017, which means there are “moving road closures” as work nears completion.

The City of Andalusia, the Andalusia Board of Education, and the Public Educational Building Authority have collectively and simultaneously worked on plans for renovating the auditorium and stadium, raising private funding for the project, and financing a portion of the project. Board members are expected to contract with a builder as early as this week.

Johnson said he hopes to move forward with work on the Timmerman building, which the city acquired around the 2017 new year.

“We had a lady lined up to open a restaurant in the first floor of that facility, but she had a health issue that arose that put that on sidetrack,” he said. “She still wants to do it and really loves the Andalusia market. Hopefully, she will soon be able to move forward.”

He said others are interested in developing offices or condominiums in the upper levels of the building.

The mayor said he also expects the Utilities Board to address infrastructure on the south side, in a project similar to one recently completed in the north side basin, designed to cut down inflow from rain water into the sewerage system.

Commission Chairman Greg White said the county will replace several bridges in 2018, and will implement a more aggressive right of way maintenance program that he believes will enhance public safety.

“I believe the most important area of focus will be on job creation – working with our communities to support and grow existing employers and hopefully bring new employers,” White said. “Several things have begun to take shape in recent months that should enhance our prospects long-term. Those include the dual enrollment programs that our schools offer (and Now provide transportation for) and the improved certification programs in career tech training.

“I’m aware that some of our local employers are increasing production and stabilizing their operations,” White said. “A case in point is the recent Shaw announcement.”

In 2017, Shaw announced it is investing $186 million in upgrading its Andalusia plant.

“We’ve got to do everything we can to make ourselves a viable option,” he said, adding that the cities of Andalusia and Opp, as well as the county – which collectively pay the notes on the large commercial hangars at the airport – have agreed to lease them at reduced rates if they can land that prospect.

Meanwhile, Clifton said, he and others in the economic development business are working regionally.

“Our attitude is that if it is good for the United States, we want to attract it to the Southeast, and hopefully to the state,” he said. “Then, we promote our area.”

The thinking is to market regionally and recruit locally, he said.

CCEDC is working with PowerSouth to promote specific sites, White said, adding that those include industrial complexes in Andalusia and Opp, as well as the South Alabama Regional Airport.

Meanwhile, Clifton said, the county and is municipalities need to do all that they can “to make ourselves a viable option” for industries.

��CCEDC and the South Alabama Regional Airport will continue to provide leadership in our economic development efforts, with prospects in view now that we hope will utilize some of our existing facilities,” White said.

“As always, we are working very hard at the airport,” Johnson said, “trying to get a long-term tenant for our big twin maintenance hangars at airport. There is always talk going on, and sooner or later we will be successful. It never gets off table with leaders of Andalusia, Opp, the county commission, and airport authority.”

“We will continue to work very hard to recruit, attract and bring to our city new and more retail opportunities for city and our market,” Johnson said. “We have demonstrated that can be done, with successes we’ve seen, we have extended our market, and can draw peoplee from 50 miles to Andalusia to shop.

That’s what we want to continue to work on,” he said.