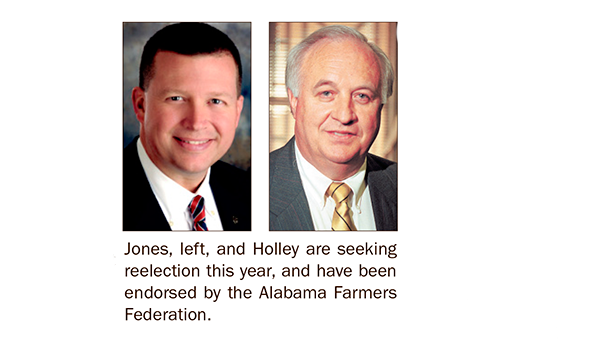 FarmPAC, the political action committee of the Alabama Farmers Federation, has announced its endorsement for both of Covington County’s representatives in the Alabama legislature.

FarmPAC has endorsed Sen. Jimmy Holley for State Senate District 31, which covers portions of Coffee, Covington, Dale and Pike counties, and Rep. Mike Jones Jr. for State House of Representatives District 92, which covers all of Covington County and parts of Coffee and Escambia counties.

Both Jones and Holley have announced plans to seek reelection in 2018.

“Sen. Holley knows the needs of our farmers and the people of this district,” said Covington County Farmers Federation President Kenneth Northey. “He has represented us well, and we know he will continue to do so for the next four years.”

Holley was born in Coffee County and received his bachelor’s and master’s degrees from East Tennessee University. He is employed by Southeast Pharmaceuticals in Elba.

“It is an honor to receive the Alabama Farmers Federations endorsement,” Holley said. “I look forward to working with them as I continue to represent the conservative values of all the people of District 31 in Montgomery.”

Holley and his wife, Mary, have two children. They attend College Avenue Church of Christ in Enterprise.

“Rep. Jones has been a real leader in the House of Representatives,” Northey said. “He understands agriculture and addresses the needs of farmers and everyone in District 92. He will continue to do good work for us in Montgomery.”

Jones earned his bachelor’s degree from Birmingham Southern College and his juris doctor degree from the University of Alabama. He served on the Andalusia City Council from 2000-2008 and as mayor pro tem from 2004-2008. He is a member of the Andalusia Chamber of Commerce and serves in various community and civic organizations including the Andalusia Downtown Redevelopment Authority, Alabama Easter Seals and the NRA.

“I am honored to receive the Alabama Farmers Federation’s endorsement,” Jones said. “We share conservative values, and I look forward to working with the Federation and all members of District 92 for another four years.”

Jones and his wife, Kathy, have two daughters. He is a deacon at the First Baptist Church of Andalusia.

The Alabama Farmers Federation is the state’s largest farm organization with more than 357,000 members.