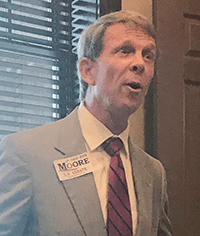 Rich Hobson announced this week he will seek the Republican nomination for Congress in Alabama’s 2nd District.

Hobson, is an Enterprise native and a former resident of Andalusia, is a longtime aide of Roy Moore. Hobson also chaired Moore’s recent Senate campaign.

Hobson is challenging incumbent U.S. Rep. Martha Roby, who is running for a fifth two-year term. He will also be running against Tommy Amason of Autuaga County, and State Rep. Barry Moore of Enterprise.

Hobson was born and reared in Enterprise, where he graduated from Enterprise High School and Enterprise State Community College. He then transferred to the University of Alabama. He has lived in Andalusia, Pike County, and now resides in Montgomery.

In November, while campaigning for Moore in Andalusia, Hobson said he lived in Andalusia from 1987 until 1992 and wored as a court referral officer. He first met Moore when Moore was a circuit judge, he said, and the two became friends while working on prayer breakfasts.

Hobson served twice as head of the Administrative Office of Courts when Moore was chief justice. He still supports Moore whole-heartedly, despite his having been twice removed from the Alabama Supreme Court.

“I walked with Chief Justice Roy Moore, twice, when he was attacked for standing for our values, and I paid the price,” Hobson said. “I was his campaign manager in this last campaign, and all of us who were involved paid a price as we watched the liberal elite in America pull off the biggest political assassination of our time. But the reason why he was hated was because he believed strongly that we will never be great as a nation if we do not acknowledge the God of our founding fathers and his truth. If we don’t get this right, America will cease to exist.”

Hobson said his campaign will be based on these three priorities: “to prioritize spending to rebuild the military” by educating the military on the weapons and equipment that they use and by using military enforcement on keeping the border secure, “To put America on a path to permanent prosperity” by repealing Obamacare and other unnecessary departments such as the Department of Education, and “By reminding America that our Judeo-Christian values are what made the country great.”

Hobson said he decided to run for Congress because he wanted to help the nation because it is at a crucial time in history.

This is Hobson’s first time running for a public office. The primary will be June 5.