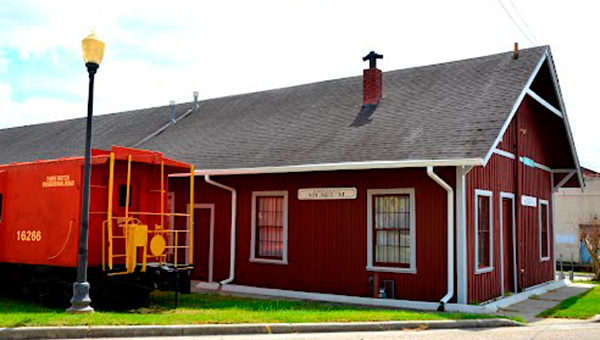 Members of the Covington County Historical Society say they have outgrown their existing museum.

Leaders of the Covington County Historical Society were pleased with the news that the city is acquiring property adjacent to theirs in the downtown district, which will allow them to expand the Three Notch Museum.

Sue Bass Wilson, a founding member of the CCHS, said the group has “a treasure of artifacts” it is not able to display in its current location.

The current museum building is the converted and restored former Central of Georgia depot, the oldest wooden building in downtown Andalusia (Circa 1900), Wilson said. The property is listed on the National Register of Historic Places.

The museum’s displays range from Indian arrowheads, tools and weapons to an extensive collection of photographs from the Alatex collection. There are military uniforms; vintage chairs and a spittoon from the courthouse; kitchen items; and medical tools. On the grounds there is a log cabin, the H.B. Little country store, and the River Falls post office.

Wilson said initial talks have included the possibility of restoring the new building to its art deco design of the 1950s, opening the now-covered windows and displaying antique cars there.

A parking lot will be added to provide accessibility to both the current grounds and the new ones.

Wilson said it is expected the city will bring professional museum curators in to work on the project. To date, the CCHS has relied upon volunteers for all of its work.

“Ever since the mid 1980s, we have only had volunteers work with us, so we are very excited to have some professional help,” Wilson said, “It should be a long project, but we are looking forward to expanding and bringing in extra attractions for this great city.”