Renovations at AHS start in February 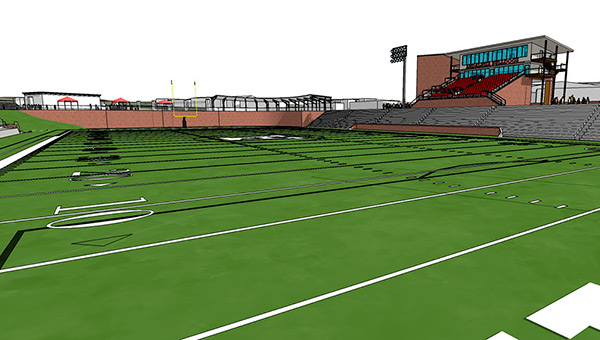 The Andalusia Board of Education Monday night approved a $9.3 million contract with Wyatt Sasser Construction for projects at Andalusia High School.

The contract represents the “base bid” for the project which renovates the stadium and the auditorium. If all of the proposed project is done, it is expected to cost $12.5 million.

“Entering a contact allows us to get started,” Superintendent Ted Watson said.

The board wants the stadium project completed by the time football season begins in the 2018-19 school year. It initially was hoped the project would begin in January; now Watson said he hopes work can begin Feb. 1.

“There is pre-construction meeting on Jan. 19,” Watson said. “Our hope is that (state building officials) would allow them to start mobilizations of equipment, and demotion ahead of complete approval of the state building commission.”

There also will need to be a meeting with school officials about traffic flow and safety concerns.

“They’re really anxious (at the high school) about things like Memolusia on Feb. 3, graduation and other events,” Watson said. “As soon as we know something about when (the construction company) can mobilize, we will know more about where things will go.”

The base bid does not include these portions of the project:

Part of the project calls for moving the field closer to the current home stands. However, the architect has recommended that the field not be moved if the board elects not to do artificial turf.

If the field were moved and turf was not used, it is unlikely the grass would be ready for the 2018 football season, the architect told board members in December.

Watson said on Monday the artificial turf is expected to cost $750,000.

The next step, Watson said, is for the board to make a formal request to the City of Andalusia to secure financing through a bond issue.

Watson is recommending that the board request a $7 million bond. Rep. Mike Jones has secured $1.25 million in state funding, and the city and city board of education have been saving monies from the half-cent education sales tax, which adds another $1.5 million. The Public Education Building Authority has been raising private money, and will have at least a $500,000, Watson said. The school board also will take $2 million from its cash reserves.

“We have already paid a half million of the costs to the architectural firm,” Watson said. “If you take that out, and we save a half million on the project through some value engineering, all of those numbers add up.”