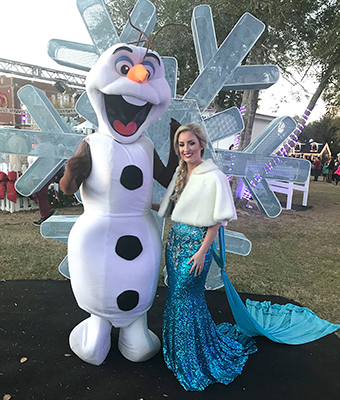 Elsa (Catherine Weed) and Olaf are among the characters who will be at the annual Meredith’s Miracles’ Cookies with Characters event.

Turnout has been good for the first two days of 2018 Cookies with Characters tryouts, but more people are still needed to fill the roles for this year’s shows, director Kiley Spears said.

Spears is looking to fill more than 150 spots available, she said, adding that students can earn community hours by volunteering to work on the show.

Cookies with Characters events have two components – a show, when characters come on stage, and a time for children to pose for photographs and collect autographs from each character.

Tryouts are set for:

“You only have to come to one of the auditions,” she said.

The tryouts, which are open to students in 8th grade and up, are moving to the former Ansley Place building, located at 1214 East Three Notch St.

Tryouts are conducted on a come and go basis and students do not have to stay the entire time. Spears said that try-outs include trying on costumes, dancing, if the character dances and students must show personality. They must be available for Sat., Feb. 24, all day.

Spears said there are limitations for face characters such as the Disney princesses.

“Cinderella has to be blonde,” she said.

Additionally, if you had participated in the past, you may text Spears at 427-5321 to sign up for the same character, and will not have to audition again.

The event is the non-profit’s biggest fundraiser of the year.