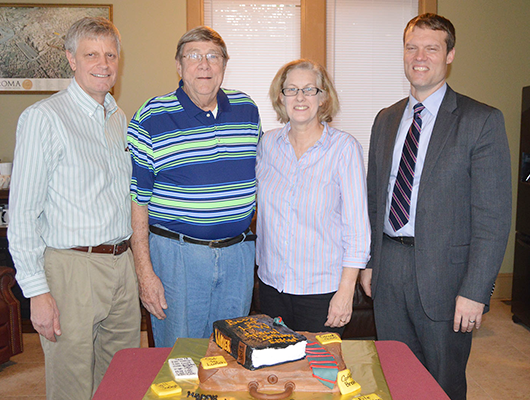 The Covington County Bar Association invited its members to a Friday meeting hosted by attorneys Mark and Anne Christensen, and made much ado about making sure a certain member – Grady Lanier – was in attendance.

But the lunch meeting was actually a surprise birthday for Lanier, who turned 74 on Friday. Lanier was working a property line case with a client and worried well-wishers by arriving a little late.

“I was very surprised,” he said.

Lanier said it was the second surprise party of his lifetime. The first was when he reached 65.

The luncheon was capped off with a birthday cake that looked like a briefcase and law book decorated with icing to mimic Lanier’s trademark yellow sticky notes. He often leaves them on the front door of his office with messages like “out to lunch.”

Asked what advice he’d give to someone who wanted to still be as active as he is at 74, he said “Keep your mind active, and stay active.”