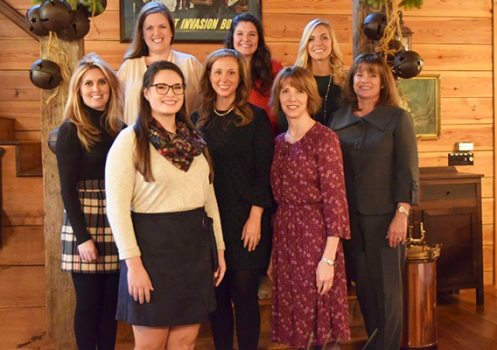 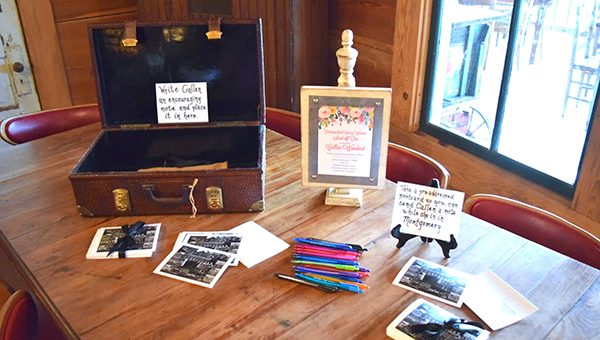 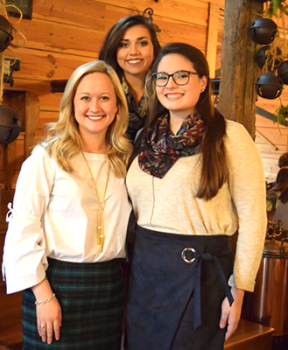 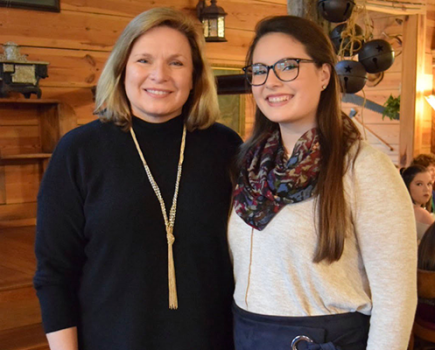 Callen with her mom, Beth Woodard 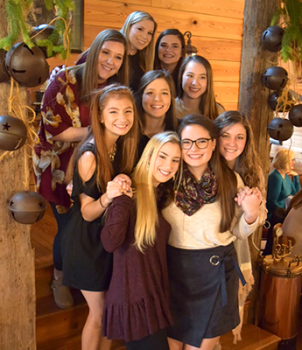 Close friends were on hand at the tea for the sendoff

Callen Woodard, a standout senior at Andalusia High School, is in Montgomery for a weeklong preparation for the statewide scholarship competition, Distinguished Young Women.

Woodard won the county competition last July and will be facing talented young women from across the state on Fri., Jan. 19.

“I’ve always wanted to participate in this competition ever since I was little, so it means the world to me that I get to represent Covington County,” she said.

Two years ago, as a participant in the DYW little sister program, Woodard was partnered with eventual Covington County DYW Lilian Andrews. Last year, Andrews was on stage to recognizer her “little sister” as her DYW successor.

Woodard has been preparing for the state event since July.

“I’ve mostly been running and trying to get in shape for the fitness portion of the competition,” Woodard said, “They sent a DVD of the dance routines about a month before the competition for all of the participants to go ahead and get familiar with the dances, so I have been doing that as well.”

Besides the fitness category, the interview portion of the competition is one to be reckoned with.

“I’ve had my parents ask me questions almost daily so I would be comfortable with the interview process. Linda Kyle has also been a really big help,” Woodard said.

Another big factor in DYW is how well rounded a participant is. Woodard is involved in marching band, and served two years as drum major; concert band; serves on the state board of Key Club; is in Anchor Club; and FCCLA. She represented AHS at Girl’s State, and is the current SGA president.

This competition also includes a talent portion, in which Woodard will be playing the song Dueling Banjos on the flute.

“I was drum major in the fall so I didn’t get to play the flute as much as I should have, but it’s just like riding a bike, you never really forget it,” Woodard said.

Scholarship also is a consideration for DYW. Woodard scored well on the ACT (33), and plans to enroll in the University of Alabama in the fall. UA is also her mom’s alma mater.

Bennie Shellhouse, Andalusia High School’s vice principal and band director, said, “She is a great leader. You can tell when she walks in a room that she just stands out above everyone. I’m excited to see how far she can go in this competition.”

As a Girl’s State representative, she met some of the girls who are participating in DYW.

“A lot of the participants in the state program did go to Girl’s State, but since it is such a big program I didn’t get to meet all of them, so I’m excited to meet them this week!” Woodard said.

Woodard said that packing has been a challenge since she will be going away for a week to prepare for the competition, but she has had help from her DYW “big sister” and predecessor, Andrews.

“I’m lucky to have people in my support group that have been able to help me so much. Mrs. Cathy Powell (DYW chairman) even came to help me pack and made sure I had everything I needed,” Woodard said.

Woodard said that her mother has been a big help with shopping for new self-expression dresses. Self-expression is another portion of the competition.

When asked what she hoped to gain from the experience, Woodard said, “I am really excited to meet new people and make a real connection with these girls. I am also ready to stay with the Cyr family, and meet my roommate Karoline Copeland, Mobile County’s DYW.”

Woodard will be gone a week in preparation for the competition and will not be allowed to have her phone.

“I’m not too worried about it,” Woodard said, “no one will have their phone so I’m ready to be disconnected and focus on what I need to do, plus plenty of friends have already said they would send me letters.”

Woodard also had the opportunity to go to the College Football National Championship on Monday night where she cheered on the Tide.

“What a game! It is honestly the best game I have ever been to,” Woodard said, “I was beyond nervous the first half and then couldn’t believe when Saban put Tua in at the second half. I was just so lucky to have witnessed the game.”

Woodard has been to every National Championship that Alabama has played in since 2009.

She is the daughter of Beth and Allen Woodard.