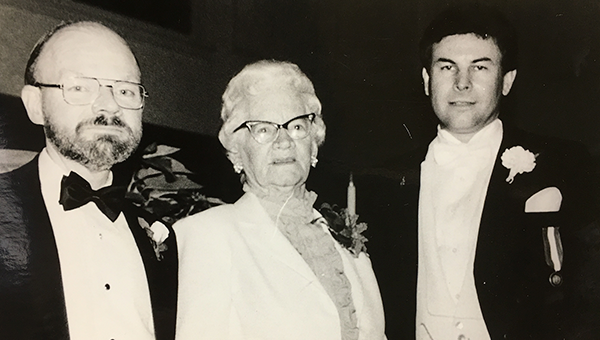 “Ah, yes, I remember it well” are the lyrics from the 1958 Broadway show “Gigi” by Lerner & Loewe. Maurice Chevalier and Hermione Gingold appeared in the movie version and sang this memorable duet.

Around the summer of 1970 not too long after I returned to Andalusia having been a college student in Tuscaloosa for four years, someone phoned me and invited me to play the piano for someone to sing at a show in the East Three Notch School auditorium. The singer was what she called a new teacher who had arrived in town a few years ago, “the most popular teacher at the Andalusia High School.” I can’t remember the song on which I accompanied him, but that was the beginning of a long-lasting friendship with Mr. Wingard, Joseph Cecil Wingard. “Ah, yes, I remember it well.”

Mr. Wingard so often quoted the writers and the poets so I will quote him from his 100th Class of Andalusia High School Series– “For someone to be forgotten by everyone – that seems the ultimate sadness to me.” Many agree that will not be true of Mr. Wingard including his former English and journalism students, fellow teachers, church and choir members, Samford alumni and classmates, relatives, travel companions, and friends of all ages in every walk of life.

Joe Wingard was reared in Montgomery and was graduated from Robert E. Lee High School and Howard College in Birmingham before it became Samford University. He came to Andalusia as a teacher in the 1966-67 school year and was grateful to Miss Winona King who recommended him for the position. I heard of him about the time he was living in Mrs. Thweatt’s “Cotton Cottage” across the street from my Brunson grandparents.

It soon became apparent that even though he was not born here and in his words, “often ignorant of information you may take for granted,” Joe soon gained an interest and appreciation for the history of old Andalusia. By 1976, America’s Bicentennial year, he and fellow teacher Dan Shehan had written a pageant to commemorate the celebration including songs and dialogue which featured local talent. He impersonated the American Revolution “Town Crier.”

Without any hesitancy, I can say that it is my belief that without Joe Wingard’s guidance, enthusiasm, interest, instruction, fairness, and wisdom, Andalusia High School would probably not have a Heritage Room filled with preserved mementoes and collectibles; AHS Homecomings of the 10-year design; Homecoming skits always with a Mr. Wingard impersonator; a Heritage Edition of the school yearbook, the Memolusia; a Centennial Committee that recognized and commemorated the 100th anniversary of the city public schools; a “Miss Memolusia” song written especially for the annual school beauty pageants; oh – so traditional baccalaureate and graduation ceremonies; and after 39 years of teaching, a host of former AHS students who went on to be English and journalism teachers, writers and columnists, artists, attorneys and judges, magazine editors, doctors and nurses, engineers, farmers, disc jockeys, business owners, coaches, musicians, actors, dancers, and builders who all benefited from his Christian values and proper decorum in his regimented classroom.

Without Joe Wingard’s presence and residency in this town he called home, Andalusia would probably not have had a Christmas Sing-a-Long party that lasted for some 25 years; a collection of original Christmas songs written along with Dan Shehan such as the memorable “I’m Getting All Dressed Up for Christmas” and “The Mistletoe Song;” graves tended to of his widow lady friends that he admired and adored; a reenactment of the Old Opera House and other historical society programs which preserved the history of the town; a Three Notch Museum which sprung from the goals of the historical society to preserve and publicize the county’s history; the “Mrs. Grundy” weekly society column which appeared in The Andalusia Star-News delighting and enthralling many a reader for a number of years!

Born in July near the fourth of July, Mr. Wingard was as patriotic a citizen as you would ever want to meet and know, a real flag-waving American. His death was in December just a few days after Christmas, a holiday he most loved and celebrated in numerous ways. When he went back to his parents’ home in Montgomery, after the Christmas holidays, he would take much pleasure walking the busy city streets and shopping center areas where wrapped in a plaid woolen neck scarf purchased in Ireland, he would smile and tip his hat greeting strangers saying “Merry Christmas and Happy New Year!”

In his retirement, Mr. Wingard decided to travel. So he did. He traveled with the Samford alumni and friends group to Great Britain three times. He traveled with the Betty Mitchell “Busketeers” to many tourist attractions all over America. Always studying the itinerary in advance, he was eager not to miss any sight or scene of importance. That resulted in his visiting museums, art galleries, plays, musicals, symphonies, parks, four o’clock teas, cemeteries, cathedrals, gardens, monuments, palaces, and historic homes and halls.

His favorite retreat was his late grandmother’s house in Deatsville above Wetumpka where he would take along some favorite books and short stories to read on cold wintry days and nights. He might even resort to writing some colorful and sincere thank you notes in lovely penmanship for which he was known. In the Coosa River Cemetery of rural Deatsville, he chose to be buried wearing his favorite tuxedo reserved for special Christmas occasions. He was laid to rest on New Year’s Eve. I believe he would say, “Ring out the old, ring in the new!” That sounds like Longfellow, his favorite poet.

“I like happy endings, so let’s end here for the time being,” he himself penned. In conclusion, here are some other words from one of his published poems I will leave for you readers to savor:

“Oh, friend, what glory life can be! Oh, what a happy history. If we dare to do our best and trust in God to do the rest!…But now you’ve come and walked with me and, oh, the strength in company! Kind friend, you’ve inspiration brought to help me do the things I ought. And now we’ll part, though not for long. We’ll meet again, sing some old song, and cheer each other like we’ve done, recount the victories to be won. But even if we may not meet, take courage in your ev’ry feat, remembering that one day we will meet for all eternity.”

A fitting goodbye as this community can bid an outstanding citizen, we bid our friend farewell – “Goodbye, Mr. Chips!”

(A memorial service will be held at the First Baptist Church of Andalusia on Sunday afternoon, January 14, 2-4 p.m. A tea party visitation in the fellowship hall will follow the service. Everyone is invited.)

Sue Bass Wilson (AHS Class of ’65) is a local real estate broker and long-time member of the Covington Historical Society. She can be reached at suebwilson@andycable.com or suebwilson47@gmail.com.)