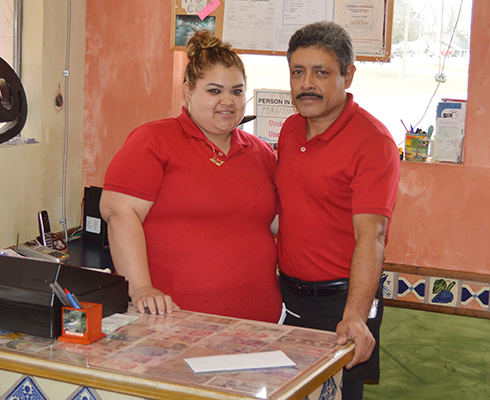 Martin Reyes, owner of Old Mexico, and his niece. Reyes worked in the fields when he came to America, and gained citizenship.

Six bipartisan members of Congress met on Thursday with President Donald Trump to negotiate a spending cap bill that would keep the government from shutting down, and give some hope to “Dreamers” by reaching a resolution on the expiring Deferred Action for Childhood Arrivals program, or DACA.

Background: What is DACA?

With the bill being put on the back burner time and time again – and a president who wants DACA to end – some locals find themselves on edge.

“It won’t affect my immediate family any, but I do have a nephew who is under the DACA program who is worried about what will happen next,” Martin Reyes, the owner of Old Mexico, said.

Reyes said that he is not worried about his workers, because he requires every employee to be legal and provide the necessary documents, but with DACA being repealed it could have an impact on the number of Hispanics that he could hire.

“A lot of the Hispanic people in Alabama will be affected if this deal does not go through,” Reyes said, “The Hispanic culture is known for its hard work ethic and it shows. I did come here illegally and had to work in the fields and everyone that I saw was either Mexican or Guatemalan. Those are the type of people keeping the agricultural fields under control and those are the types of people that we will lose.”

Reyes finally got his citizenship after going through strenuous paperwork and residing in the States for the allotted time necessary.

Reyes said that Mexicans have worked in the United States since 1942 when even his father came to work under the Bracero Program, which allowed Mexicans to work on farms in the Northwest during the wartime labor shortage.

“I came here without a penny in my pocket, but worked hard because that is what the Hispanic mentality is,” Reyes said “We provide for our family and that is why my father came here and that is why Hispanics will always find a way to come to America.”

Since any DACA deal would require bipartisan agreement, it has been tied to another deal, which would fund Trump’s wall to secure the country’s southern border.

“The wall is crazy. The country would be going back to old ways instead of progressing onto a better respecting world,” Reyes said, “The wall sounds like a good way to keep the Mexican people out, but we fly in airplanes and ride on boats. The wall is only a temporary solution.”

Reyes said that he respects the laws, works hard and wishes that people would treat Hispanics with respect because it is what they deserve.

If DACA ends, then 800,000 young adults could be sent to a country that they have never even known.

Andalusia High School student Ivette Rojas was born in the United States, but her brothers and sisters are a part of DACA and are worried about what might come of their lives.

“If it weren’t for the DACA program, my brother might have been deported earlier this year in Minnesota,” Rojas said “They were brought here and this country is all that they know.”

Rojas said that for her brother to even get a drivers license it took several years, not to mention the hard time that it has been to find a healthcare provider or even go to a rated R movie.

“I definitely feel stereotyped and attacked by Trump trying to repeal this bill. He says that we are all rapists, criminals and heathens, but that is not true at all,” said Rojas, who plans a nursing career.

Sen. Dick Durbin, D-Illinois, one of the “group of six” that proposed the bipartisan deal said, “If we do not act now then 1,000 young adults a day will lose citizenship. 20,000 of those people are school teachers, and 900 are in the military, so we have to get this deal approved now.”

Trump said earlier this week that he would sign any bill brought to his desk by the “group of six” because he had enough confidence in their intelligence, but as of Friday he rejected the deal that was brought to him.

Congress has until Fri., Jan. 19, to pass legislation to avoid a government shutdown.