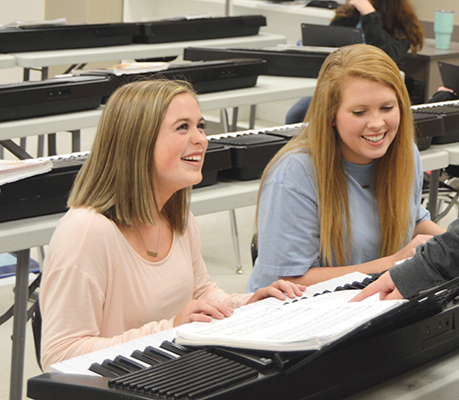 Julie-Layton Bryan, left, in music class at Straughn on Tuesday.

Bryan was the first individual to benefit from Cancer Freeze, and last weekend, became the first cancer survivor to win a crown in the Cancer Freeze pageant.

Cancer Freeze is a non-profit annual fundraising event held the first Saturday each February in Florala to benefit individuals from South Alabama or Northwest Florida who are battling cancer.

Bryan was diagnosed with retinoblastoma in her left eye and underwent intraarterial chemo under the care of New York City doctors beginning in November of 2008. The chemo worked, but in 2013, she started experiencing headaches. Her mom, Stephanie Bryan, knew in her gut something was wrong. By the end of the month, tests confirmed the family’s fear: two new tumors in her eye. By early February, the spunky 9-year-old had had an enucleation.

And it never stopped her. She returned to Alabama sporting hot pink eye patches that matched her outfits.

“I have been doing pageants ever since I was 18 months to two years old,” Bryan said. “I love competing in this pageant because of what it represents and that all the money goes to the families.”

Bryan has a prosthetic eye, but that has not changed a thing for her motivation in the pageant world.

“I was in a pageant 12 days after I got my new eye and then four weeks after that I was in another one,” Bryan said, “Since I’ve had it so long it really doesn’t feel any different from a real eye.”

Bryan has been competing in Miss Cancer Freeze since it started five years ago.

Now she hopes to be a role model for others battling cancer.

“When I was little, I always would have someone older who was battling just as hard as I was so it feels really great get to be a role model for someone who is battling now,” Bryan said.

Mrs. Bryan said that they have been to New York almost 27 times to get treatment for her daughter.

“The pizza is honestly my favorite thing about New York,” Bryan said, “It is an all year long food so I always get to enjoy it!”

Though the Bryans have not travelled to New York in two years, they are planning to take one last trip to try and see if they can transfer Bryan’s medical care somewhere closer.

Bryan usually walks in honor of her friends or people that she has met through her battle with cancer. This year she decided to walk in honor of a girl who passed away named Reitza, a 21-year-old from Puerto Rico that moved to New York to seek better treatment, and a boy named Jael who also is from Puerto Rico, who is battling kidney cancer.

“I usually pick somebody different each year that I do a pageant so I decided to walk in honor of them because I had always looked up to Reitza while we were staying at the Ronald McDonald house in New York, and I recently got in touch with Jael after a while and the impact that both of them left on me made me want to walk in honor of them,” Bryan said.

Bryan said that she loves to have Cancer Freeze founder Caleb Davidson as an emcee so he can try and pronounce their names.

Bryan is also very busy in extra-curricular activities. She is a majorette, on the Covington County dance competition team, part of the Straughn Hope Club and the Spanish Club.

“I honestly believe doing these pageants has helped with Julie-Layton’s confidence,” Mrs. Bryan said, “Since we have been doing them she has been more outspoken and always has a cheerful personality.”

On Feb 4, the day after the 5th annual Cancer Freeze, Bryan will be five years cancer free.

It will be an all day event starting with the 5K and pancake breakfast. There will also be watersports, inflatable bouncy houses, an auction and raffle, chili cookoff, blood drive, car show and bass tournament that will all be located at Lake Jackson in Florala.