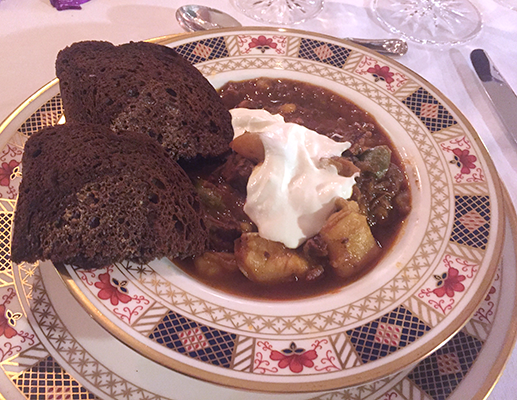 I try to find a time each January to cook for my friends in Wilmington. They are always having us for drinks so I feel guilty going to their house and not doing something in return. I usually do a curry but decided to do a goulash since I did enjoy this (stew or soup) in Vienna. I chose a simple mushroom salad for starters and for dessert (my friends love dessert) a banana sticky toffee pudding. What could be more enjoyable to eat by the fire on a cold winter night and share this meal with friends?

Both recipes are from the January 2018 issue of ‘Food and Wine’ magazine.

¼ cup Hungarian sweet paprika (I used regular paprika since I could not find the sweet and found the goulash a little bitter so added more apple cider vinegar and some lemon juice) and this made it taste fine.

In a large Dutch oven, cook bacon over moderate heat until crisp, about 7 minutes. Using a slotted spoon, transfer bacon to a plate, leaving fat in pan.

Season beef with salt and pepper. In batches, add beef to pot, and cook in bacon fat over moderately high heat until browned all over, about 5 minutes per batch. Using a slotted spoon, transfer beef to plate with bacon.

Add ¼ cup of water and onions to pot. Cook, stirring with a wooden spoon and scraping up browned bits, until all liquid is evaporated and onion is softened, about 6 minutes. Add paprika, tomato paste, and caraway seeds; cook, stirring, for 1 minute.

Add 7 cups of water and 1 tablespoon of the apple cider vinegar; return the meat and any accumulated juices to the pot. Bring the goulash to a boil, cover partially, and simmer over low heat for 1 ½ hours.

Add potatoes and bell pepper to pot, and simmer, partially covered, over low heat until beef is very tender and sauce is slightly thickened, about 1 hour.

Stir in fish sauce, if using and remaining 1 tablespoon apple cider vinegar. Season with salt and pepper. Ladle into bowls and serve with sour cream and rye bread.

1/3 cup extra-virgin olive oil, plus some for drizzling

In a small bowl, whisk the olive oil with the lemon juice, parsley and red pepper. Season generously with salt and pepper.

Preheat oven to 350°. Grease a 9-inch square metal pan with butter. In a small heatproof bowl, pour the boiling water over the dates; stir in the baking soda. In a medium bowl, whisk together the flour, baking powder, and salt.

Scrape the batter into the prepared pan, and bake until a toothpick inserted in the center comes out clean, about 30 minutes.

Meanwhile, in a small saucepan, combine the heavy cream, the remaining ¼ cup of butter, and the remaining 1 cup of brown sugar. Bring to a gentle boil over moderate heat, and cook until slightly thickened and deep golden, about 3 minutes. Keep warm.

Transfer the pan to a wire rack. Using a skewer or toothpick, poke holes all over the cake. Pour half of the warm sauce over the cake, and let stand until absorbed, about 10 minutes. Serve warm with the remaining sauce and the whipped cream.

Spice up your eggs, for breakfast or supper