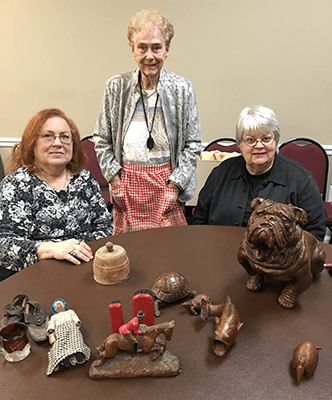 “Americans’ Passion for Collecting the Past” was the topic for the January program of the Covington Historical Society on January 25. David Wyatt, president presided at the first meeting of 2018.

Early American history is so compelling that it is no surprise some people don’t want to merely study or celebrate it; they want to possess a piece of it. Collecting artifacts has been popular since the Colonial and Revolutionary War era. A recent resurgence in the interest in American memorabilia has been influenced by online marketplaces and the popularity of reality TV shows such as “American Picker” and PBS’s “Antiques Roadshow” featuring antique and collectible hunters and traveling appraisers.

Several CHS members brought to the “Share and Tell” meeting an array of interesting items from their personal collections.

Aurelia Scherf brought some baby shoes that belonged to her father Paul Scherf. She also shared a folk art wooden doll made by mountain craftsmen that belonged to her grandmother Mrs. Ruth Scherf, a native of North Carolina, and a commemorative cranberry glass from the 1904 World’s Fair in St. Louis, Missouri.

Irene Butler brought a wooden butter mold that was used by her mother, Mrs. Hallie Davis. She also wore one of her mother’s red and white “Sunday” aprons from the Depression era. She shared a picture of baseball players from the Harmony community that was dated before 1926, the year she was born. This team was made up of grown men. Norma King stated that Sanford also had a men’s baseball team in that same time frame that would play other community’s teams from Covington County.

Nancy Mills Robbins displayed a plate from her “flower” wall of collectibles along with a “Gone With the Wind” type fan decorated with flowers. Her passion for collectibles is flowers!

Brenda Deason brought some unique figurines from Red Mill Manufacturing Co. in Fishersville, Virginia. These collectibles which included a bulldog, a turtle, a fish, and an armadillo were made from crushed pecan shells in a wood mold. Her bulldog is her favorite pride and joy, one she calls the “Andy Bulldog.”

Dr. Fred Winkler shared letters in the form of a diary from his great uncle written in the 1862-1865 Civil War period. Frederick Carl Winkler was from the Milwaukee, Wisconsin 23rd and fought in the War of Northern Aggression. These letters, some written about the battle of Shiloh, can be read on the internet.

Wyley Ward commented that there were three companies from Covington County that fought at Shiloh. Captain Harper got shot and killed, and just about those entire companies got wiped out early in the war.

Jan White told about some of her “White House” and presidential campaign memorabilia including her collection of White House Christmas cards and ornaments and books such as “Under This Roof.”

David Wyatt brought a copy of a 1927 letter from the president of Horse Shoe Lumber Company, Mr. E. L. More, written to the Town of Red Level.

Members and guests enjoyed the refreshment time where they discussed further their passion for artifacts in their personal collections and at the Three Notch Museum.

The next meeting will be the last Thursday in February when Sherry Johnston from the Conecuh County Library in Evergreen will present a Powerpoint presentation on creeks, rivers, and streams in the Conecuh and Covington County areas. The public is invited to attend.