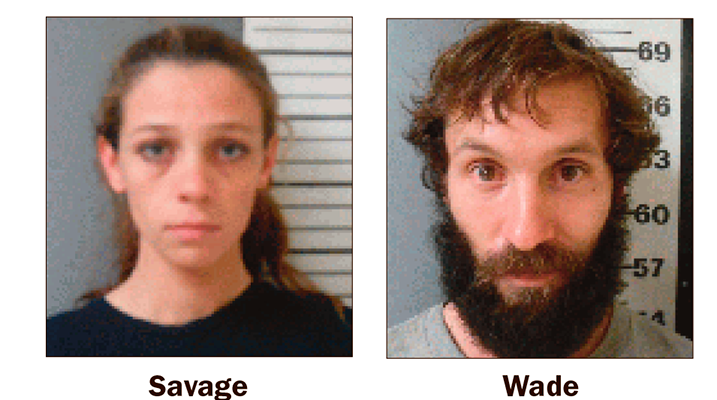 On Sun., Jan. 28, Covington County deputies were dispatched to Cedar Crest Road, located off of County Road 70 to a good Samaritan that had two subjects held at gunpoint at his neighbor’s house that was being remodeled.

Upon arrival, deputies found a white male and a white female sitting in a vehicle that was located on Cedar Crest Road. Shortly after the deputies arrived, the home owner showed up and stated that he had not given anyone permission to be on his property. Deputies discovered several pieces of electrical wire in the possession of the suspects, identified as Kayla Savage, white female, 25, of Opp. Also identified was Jeremy R. Wade, white male, 29, also from Opp.

Both suspects were arrested on scene and charged with criminal trespassing 3rd and theft of property 4th, both misdemeanors. They were transported to the Covington County Jail. They were held on a total bond of $3,500. Both have been bonded out.

Sheriff Dennis Meeks would like to thank the good Samaritan for his diligence in helping rid Covington County of some of the criminal elements.

After The Star-News posted this story to its website on Monday, Wade contacted the newspaper by email claiming that he and Savage were not stealing, they were recycling.

“We got into the construction dumpster which was 15 to 20 yards away from the house,” he said. “There was no signs saying no trespassing. If there was then we wouldn’t have gotten close to the property. We recycle, not steal.”

Wade also said the “good Samaritan …e threatened to shoot us when we were polite. Even said yes sir, no sir… the sheriffs stood around and let him. Our lawyer will tend to the rest.”

Wade asked that the couple’s names be removed from the story because he said they were being slandered. The crime of slander occurs when a false and damaging statement is made about someone. According to the Covington County Jail Report and a press release from the sheriff’s office, Wade and Savage were charged with the crimes.