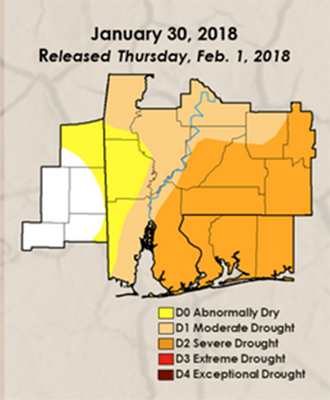 A drought information statement released Thursday showed a worsening in conditions in the local area, and classifying Covington County in severe drought.

The statement was released by the National Weather Service and distributed locally by EMA Director Susan Harris.

“The severe drought has made a considerable westward expansion over the local area, now encompassing much of those areas to along and east of I-65,” Harris said.

According to the National Weather Service, the forecast for the winter and spring months is for below normal precipitation, which is not good news.

“This is the typical recharge season across the Southeast, but there is little evidence that moisture recharge is occurring,” the NWS said.      “Although, another cold front brought some much needed rains to the Gulf coast the last week of the month, rainfall deficits of generally between 1 and 3 inches held over moderate to severe drought areas.”

A drought could spell trouble for local farmers.

The impacts of severe drought can include loss to crops and pasture, stress to livestock, and a higher threat of wildfire. While burn bans are common in a drought, there has not been a ban issued in this area.

“There is not a whole lot that we can do to prepare for this drought,” Covington County Extension Agent Chuck Simon said. “There is still plenty of water so wildlife should be OK.”

“With this freeze that just happened, that will do more hurt to the ground than the drought will,” Simon said.

Local farmer Tommy Thompson said that livestock is doing well right now, but if the drought goes into the spring then it could cause some major problems.

“Winter crops shouldn’t be affected, but if this drought continues then the spring and summer crops will definitely be affected,” Thompson said.

The NWS will update its drought statement on Feb. 8. An animation of the drought’s spread can be viewed at http://www.weather.gov/mob/droughtinfo.