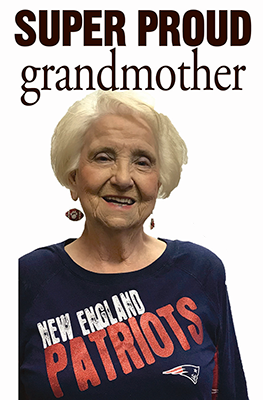 When the Philadelphia Eagles and New England Patriots kick off for Super Bowl LII Sunday, Era Andrews knows exactly where she’ll be.

“I’m going to stay at home and sit in my comfortable chair, and I will not be answering phones,” she said. “I will be glued to the TV.”

She’s a football fan, for sure. But more specifically, she’s a Patriots fan, and she’s a fool for their center, who just happens to be her grandson, David.

And that’s why Mrs. Andrews, who loves to host parties, plans to watch the game alone.

“Last year I went to a Super Bowl party at my granddaughter’s house in Daphne,” she said. “She told me she was having a few friends over. I counted 45.

“I get excited. I yell and clap,” she said. “I watch every time a play is over with to make sure he is up and looks OK.”

Her grandson, who grew up in Atlanta and played college football for Georgia, has always loved the game, she said.

“When David was 6 years old, his daddy carried him to see the Denver Broncos play,” she said. “Dan Reeves was the coach. David told him, ‘Keep on doing this Uncle Dan, I’m coming this way.’ ”

David played baseball and football at Wesley Academy in Atlanta until his coach told him he needed to choose a sport. Apparently, he chose well.

After graduating from Georgia, he signed with the Patriots as a free agent in 2015. When injuries sidelined the starting and reserve centers that year, Andrews started the first 10 games of the season. In 2016, he started every game for the Patriots and formed a bond with quarterback Tom Brady.

In May of 2017, about a month after his marriage to Mackenzie Dempsey Andrews (they met at Georgia, where she was a cheerleader), Andrews signed a four-year, $9.6 million contract extension.

“We always went to his games, whenever he played,” she said. “We went to see him play several times at Georgia, and I’ve been to Foxborough.”

Foxborough, Mass., is the home of the Patriots.

“I talk to him pretty often, and we text a lot,” she said.

In his third year with the Patriots, he’s in his second Super Bowl game. Last year, the Patriots won after trailing by as many as 25 points during the third quarter.

“Last year, I thought I might have a heart attack,” Mrs. Andrews said. “It was awesome to see them come back and win.”

Throughout his life, she said, he always enjoyed eating good Southern food when he visited. These days, she ships him homemade biscuits and Conecuh sausage, which are delicacies in Foxborough.

“What is so important to me is he is humble,” Mrs. Andrews said. “This year he was chosen captain of the team on a votes of the players. That says a lot. That sums it up for me.”