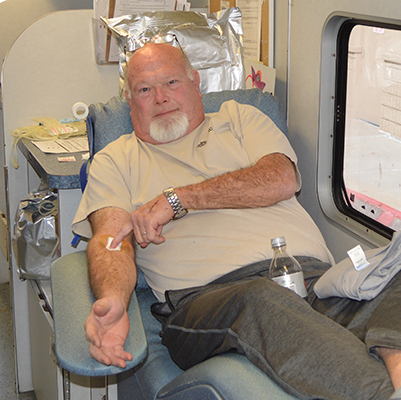 LifeSouth Community Blood Bank and The American Red Cross has had a shortage of blood all winter due to severe weather conditions and the flu that has been spreading all over Alabama.

Even though the number of donors has decreased this winter there were still people giving blood yesterday at Wal-Mart, where LifeSouth held a blood drive.

“I donate blood because I want to help anybody that needs it,” Carolina Fire Chief David Fite said, “It has been a big part of my family ever since I was a little boy. I almost lost a brother if it wasn’t for the community coming together and donating blood for him.”

Fite has been donating blood for the past 40 years.

“I honestly think people aren’t coming out because they are all sick with the flu,” Todd Warrens, a worker at LifeSouth, said. “We have the problem with the flu, but we are also just getting over the holiday season so I think people have been busy traveling as well.”