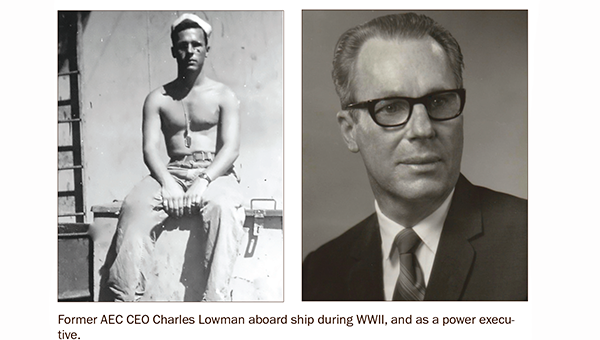 Andalusia lost another hometown hero with the death of Charles Rowell Lowman on Jan. 10, 2018. Charles was born near Searight in 1923. He attended Andalusia city schools and graduated from Andalusia High School in 1940. Charles was one of 21 young men selected to attend the University of Alabama under the Defense Training Act. He studied radio and electronic technology for 21 weeks. Upon completion, he was sent to Brookley Field near Mobile for further training. After that he was sent to the University of Florida to study radar, which was in its infancy. It was at that time he was drafted and sent to Kelley Field near San Antonio where he studied airborne radar.

It was at this point that Charles’ military life took a unique turn. He was sent to the SS Gen. Robert W. Olds stationed at Mobile and assigned to the 1st Aircraft Repair Unit. The Olds was one of six liberty ships and 18 auxiliary ships that made up a top secret government project called “Operation Ivory Soap.”

The Army had decided that the war in the Pacific required a new approach to aircraft repair. In the European Theater, planes could be repaired at fixed bases that were already in use. The Pacific war was primarily an island hopping war with no fixed bases within theater. The Army Air Corps came up with the idea of using specially equipped ships [with machine shops and other specialty repair tools] as mobile repair bases. Charles and many other Army repair troops became soldiers assigned to ships. Charles said that he was always dressed in a sailor’s dungarees with a white sailor hat.

The Olds traveled to Guantanamo Bay, Cuba, and then through the Panama Canal to Hawaii. There, they loaded supplies and headed to places like Guam, Tinian and Okinawa. Their job was to keep the B-29s flying as the war got closer to Japan.

Charles said they were lucky to never have been attacked, even by the kamikazis that sunk so many U.S. ships at Okinawa. However, they were almost sunk by a typhoon in late 1945. Between seven and 10 U.S. ships were sunk during the typhoon. The inside of the Olds was a total wreck, with most of its repair machinery torn loose and destroyed.

At the end of the war, Charles returned to Alabama and started college at the University of Alabama. He eventually transferred to Auburn [then the Alabama Polytechnic Institute], where he earned his B.S. in electrical engineering. While in college, Charles had worked some at Alabama Electric Cooperative [AEC] as a lineman’s helper and he now returned full time as a field engineer.

He would work there in several capacities over the next 38 years until his retirement in 1988. He served the last 18 years as general manager. During that time, Charles oversaw some of the most perilous times for AEC [now called PowerSouth]. Throughout the toughest of times, he was loved by his employees.

Earl McBryde, retired administrative systems manager, said that Charles was one of the best people he’s ever met and a strong leader.

John Howard, retired VP of power production, said that Charles was known for his amazing memory. At one meeting, when they were trying to recall some information from a previous meeting, Charles reached into a desk drawer and withdrew a green notebook, and quoted the decision. Howard said, “I think a good bit of Charles’ memory resided in that little green book.”

Larry Avery, retired VP of engineering, remembered Charles as a masterful CEO, steering AEC through some of its toughest times. Avery said that young engineers who made observations about power generation or transmission, were always very careful around Mr. Lowman, who was familiar with all aspects of AEC, having grown up in the company.

A.G. Palmore, retired VP of administration and finance, recalled Lowman as being “the right man at the right time” for AEC and the challenges it faced in the ‘70s and ‘80s. He was a good negotiator, level headed, with a cool demeanor and always calm.

At his death on Jan. 10 this year, Charles was 94. He and his wife, Effie Adams Lowman, had been married 65 years. He is survived by two daughters, Nora Culp [Lloyd] of Dozier and Ruth Nail [Lance] of Lubbock, Texas; several grandchildren and numerous nephews and nieces.