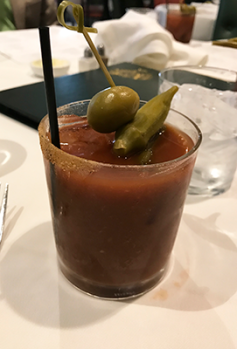 The bloody Mary is from Brennan’s 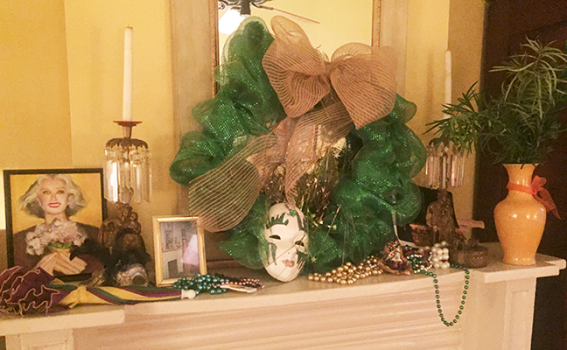 he mantle in the Andersons’ New Orleans apartment, dressed for the season 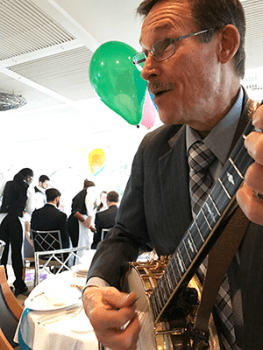 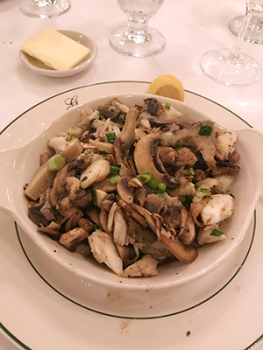 The dish is Crabmeat Yvonne from Galatoire’s 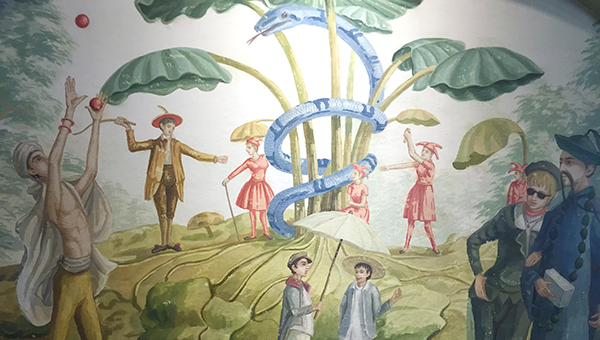 A mural at Brennan’s depicts an early carnival float. Celebrations can be quite raucous. 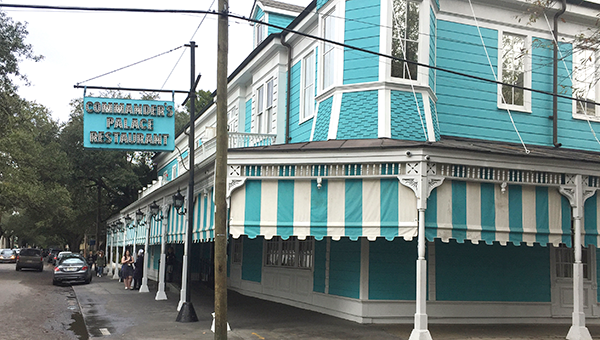 I am not a big fan of crowds but our best friends of many years decided to come down to New Orleans for five days. It was two weeks before Mardi Gras, so we caught a parade in the quarter called Krewe de Vieux. This one rolls through the quarter as in the old days and the floats are pulled by donkeys. The parade is raunchy and satiric. The theme had to do with ‘wet’ this year. And of course this is the 300th anniversary of the founding of NOLA. One float featured New Orleans 400th!—-40,000 Leagues Under the Sea. Streetcars were depicted as submarines. Other themes are not for a family newspaper. We were fortunate to be at a party on the parade route where we could retreat when needed.

Of course, my contribution to the visit was making all the restaurant reservations (which I am good at) and to make sure we were all well fed. I wanted to try some old and new restaurants for my friends and I think I did quite a good job.

We began our first evening at Upperline. We had not been there in years but Joann Clevenger is still at the helm of this New Orleans restaurant and does a great job. She makes the reservations and always greets you at the door as she has been doing since the 80s. Her food is basically Creole cuisine and is consistently good. I liked the way she does her menu. For $39, you can have an appetizer, main course, and dessert, and this is pretty cheap for a good dinner meal in New Orleans. We all chose her famous fried green tomatoes with a remoulade sauce (very delicate) and for the main course, a shrimp dish served over grilled zucchini with a sauce called Muddy Waters, used at the now closed Uglesich’s restaurant. (We used to eat at Uglesich’s back in the day—a real joint.) Recipe to follow for the sauce. For dessert we had a pecan bread pudding with a toffee sauce. Delicious!

The next day was two really good restaurants in one day, which is not a great idea since this is a lot of food to digest, but sometimes you just have to go for it! Our lunch was an 11 a.m. reservation at Shaya, a hot new restaurant in New Orleans. I could only get the 11 a.m. reservation it is so popular. The food is modern day Israeli food, fresh and different and the people in New Orleans really like it. I have talked about it before so will not elaborate on the menu, but we shared some wood-fired Brussels sprouts, ikra (whipped cream cheese, paddlefish caviar and shallots) some hummus with lamb ragu, a falafel with cabbage and cucumber tzatziki and a pumpernickel rye open faced sandwich. You get the message; all really delicious with the best pita bread you could ask for. For dinner we went to Paladar 511 (which I have also discussed before). It is a relatively new neighborhood restaurant with a mostly Italian theme and everything there is delicious, especially the arancini and the tuna crudo. I ‘Love’ their pizzas.

The third day our friends just had to go to Galatoire’s, since it is their favorite restaurant. I love it also, and we went early so it was not as noisy as usual. We shared the Grand Groute which consists of oysters en brochette, shrimp remoulade, and crabmeat ravigote. This is my favorite thing at Galatoire’s. We all had the Crabmeat Yvonne and this recipe will follow.

The next day was Sunday and after church at Trinity (where we ran into old friends from Wilmington transplanted to New Orleans) we went to Commander’s Palace for lunch. The service was perfect and the food just right and the band was perfection. A great day to be in New Orleans. “Do You Know What It Means To Miss New Orleans?”

Sunday night we four shared arguably the best sandwich in the city—-‘All That Jazz” from the nearby Verte Mart on Royal.

Our friends left on Monday afternoon, so I booked breakfast at Brennan’s for 9 a.m. We had a “Bull Bloody Mary” created there with some beef broth. It was one of the best I have had. I will have to say the breakfast of scrambled eggs over brioche with some foie gras (called Eggs a la Turk) was just not worth $35, but I can say I had it!!

Now home for salads and humble food for the week!! It is not yet Lent but I still need to fast.

Sauce used over pan trout or shrimp. Used at Upperline.

Pour the canola oil into a skillet and set on medium heat.

Add the flour and stir until a roux develops. The roux will turn a peanut butter color.

Place the anchovies into the skillet and smash into the roux.

Slowly stir in the chicken broth to form gravy.

Add the garlic and cook for approximately 5 minutes.

Add the jalapeños and cook for approximately 5 minutes.

Pour the sauce over the pan-fried trout or shrimp. Sprinkle with Parmesan cheese.

In a large skillet, sauté the mushrooms in the clarified butter for 10-15 minutes or until liquid rendered is reduced to a thick sauce. Add the crabmeat, and season with salt and pepper. Then add the sliced artichoke bottoms, and sauté gently until thoroughly heated.

Serve over toast points, garnishing the plates with parsley and lemon wedges.