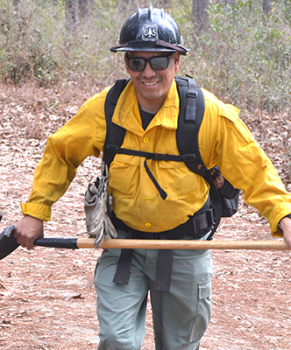 Heidi is a smoke jumper.

In wildfire season, she and at least one partner – and sometimes a group of eight – will be flown over a wilderness fire and parachute in to fight flames on the ground.

Not only do the smoke droppers carry the requisite 45-pound packs of all woodland firefighters, but they also parachute in supplies for camp. Once their work is done, they hike out with their equipment to an area where they can be picked up.

But this month, Heidi is in Alabama, helping lead the national Wildland Firefighter Apprenticeship Program (WFAP) academy being held at Auburn University’s Solon Dixon Forestry Education Center in Andalusia. This marks the first time the academy has been held on the East Coast instead of California.

And like Heidi, the 48 wildland firefighter apprentices and their leaders – who hail from California, Idaho, Arizona, New Mexico and New Hampshire – are loving the location.

David McChristian is a Dallas, Texas, native who currently works with the Forest Service in New Hampshire. His goal is to find work with a helicopter crew and rappel into fire situations.

Completing the academy will help him toward his goal, he said.

John Escalera, who lives in Southern California, is a crew boss for the current academy. Because fitness is vitally important to firefighters, PT is part of the academy. When the apprentices hike into the woods surrounding the Dixon Center for an exercise, they carry backs that weigh 25 to 45 pounds.

“We have to carry food, shelter and water,” Escalera explained. “On the ground, we have to be self sufficient for 24 hours.”

To work as wildland firefighters, individuals must pass a personal fitness test in which they move three miles in 45 minutes carrying a 45-pound pack.

Among the advantages of holding the academy at the Dixon Center, the leaders agreed, is the proximity to both state-of-the-art classrooms and woodlands. In California, they said, there’s at least an hour’s drive to move from the classroom to the forests.

Friday morning, after PT and digging break lines in the woods, the apprentices moved to sand table exercises to sharpen their tactical decision making skills.

Anthony Conte, a regional fire training specialist and apprentice coordinator, explained that leaders set up the topography of a forest in the sand tables, then recreate actual fires. A leader “dispatches” a fire call to an apprentice, who then must make decisions about how and when to react. Communication and leadership skills are among the most important for wildland firefighters, he said.

Kelsey Griffee, a veteran firefighter who now works with the U.S. Bureau of Land Management in Idaho, was acting public information officer this week. Griffee said most participants flew to Pensacola and were bused to the Dixon Center.

Griffee began working as a firefighter to pay for college, never considering the field for a career.

“My goal was to graduate debt free,” she said. “But I fell in love with it.”

It’s a common malady, she said. Firefighters become accustomed to pushing themselves physically and mentally, and don’t want to leave.

Another advantage to holding the academy at the Dixon Center, Griffee said, is the ability to participate in controlled burns in the Conecuh National Forest.

The Dixon Center itself has 5,300 acres that features fresh water springs, longleaf pine forests, cypress swamps, frontage along the Conecuh River and the National Forest.

“At the Dixon Center, students have the unique opportunity to take what they have learned from their classroom instruction and in the same day, put that ‘theory into practice’ within our longleaf pine forests,” said Martin.

Participating agencies in the current training include the U.S. Forest Service, U.S. Fish and Wildlife Service, the National Park Service, Bureau of Land Management and Bureau of Indian Affairs.

A second academy is planned in March.