Remember when: Baptists placed cornerstone in ‘58 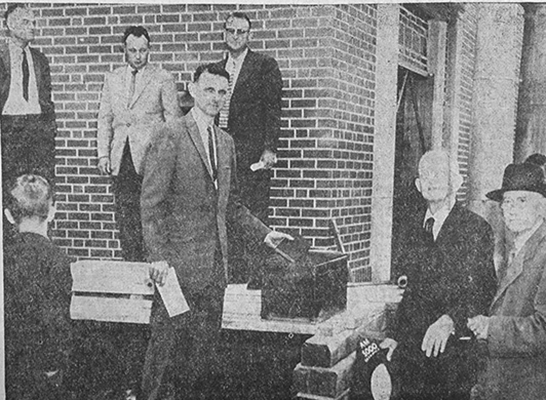 At the left, an interested spectator is (young) Tommy Turner, son of Mr. and Mrs. Euel Turner. At the right are two longtime members of the FBC, J. L. Murphy, dean of the Covington Bar Association, and W. C. Boutwell, a member of the Board of Deacons. At the rear with backs against the church building are Bob Anderson, a member of the Finance Committee, and J. R. Logan, superintendent of construction at the church, and M. E. Jeffcoat, the masonry foreman.

“We gather together to ask the Lord’s blessing…” This hymn which Americans associate with their Thanksgiving holiday was actually written sometime in 1597 to celebrate Holland’s freedom from Spain. Its author, an unknown Dutchman, was full of thanksgiving that his people were finally free from Spanish tyranny and free to worship as they chose.

In January 1958, the local Baptists were getting ready to move into their new church sanctuary building. From The Andalusia Star News, January 9, 1958, edition, it reads, “Impressive exercises are being planned Sunday by the congregation of the First Baptist Church in the laying of the cornerstone at the new sanctuary on East Three Notch Street. Rev. John Jeffers has announced that the program will be held at 11:00 a. m. weather permitting. He stated that if inclement weather prevailed, the cornerstone laying will be delayed until a later date.

“Jesus Christ, the Chief Cornerstone, is the topic of the sermon Rev. Jeffers will deliver at the ceremonies. He said that the entire service will require less than an hour.”

“Participants in addition to the Rev. Mr. Jeffers will be Mayor Leland Enzor who will be asked to make remarks regarding the meaning of the new Baptist Church sanctuary to the community.”

“Also included will be biographical sketches of all former pastors. Pastors of record include J. J. Haygood, Rev. A. J. Preston, Rev. T. Baron Gibson who now lives in Jasper, Ga., Dr. L. E. Barton, the father of Mrs. C. H. Chapman now a resident of Montgomery, and Dr. J. A. Cook. These five men along with Rev. Jeffers have served the pastorate of the First Baptist Church since 1902.”

January 16, 1958 – A caption under a photo reads: “In a history making ceremony at the new $255,000. First Baptist sanctuary, the cornerstone was laid in impressive rites on last Sunday morning. Rev. John Jeffers, pastor of the church, center, is shown placing books and records in the metal container which was sealed up in the cornerstone. At the left, an interested spectator is (young) Tommy Turner, son of Mr. and Mrs. Euel Turner. At the right are two longtime members of the FBC, J. L. Murphy, dean of the Covington Bar Association, and W. C. Boutwell, a member of the Board of Deacons. At the rear with backs against the church building are Bob Anderson, a member of the Finance Committee, and J. R. Logan, superintendent of construction at the church, and M. E. Jeffcoat, the masonry foreman. Church rolls and records and other interesting data in the history of the FBC were placed in the cornerstone of the new building.”

Another photo which appeared in the newspaper was captioned as follows: “Haskew Lane is helping prepare the metal container for the placement in the cornerstone of the new FBC sanctuary just prior to the impressive ceremonies on last Sunday morning. Pictured along with Lane are Speller Moates, (young) Mary Ann Martin, J. R. Logan, and James Caton. The metal container was used for the storage of the historical data that was placed in the cornerstone.”

The newspaper write-up beneath another photo reads: “The laying of the cornerstone of the new $255,000. sanctuary of the First Baptist Church on Sunday was a red-letter day for all members of the FBC congregation. Participating in the services were church leaders, ladies, and children alike. At the right front is Mrs. John Jeffers, wife of the First Baptist pastor who is placing historical data in the metal cabinet which was later installed in the cornerstone. Others who can be identified in the picture are Mike Windham, son of Mr. and Mrs. Roy Windham, Jim Irving, Rev. Jeffers, and Tommy Turner. Standing on the platform are Marvin Walker who read the scripture lesson; Bob Anderson; M. E. Jeffcoat; and J. R. Logan. At the far right is Bob Barrow, the son of Mrs. Robert Barrow, the organist at the FBC.”

January 23, 1958 – “Rev. John Jeffers on Sunday night resigned his post as pastor of the FBC of Andalusia. Henry Merrill, chairman of the Board of Deacons, moved that the resignation be accepted, and the second was by Mrs. Donald (Joy) Cooke, formerly the Educational Assistant of the church. With considerable reluctance, the congregation voted to accept the resignation.”

“Rev. Jeffers who has been an Andalusia pastor for seven years and is the dean in point of service of all Andalusia ministers said that his resignation would be effective the last Monday in February. Rev. Jeffers plans to accept the pastorate of the First Baptist Church of Auburn. He, his family, and his mother will move to Auburn on or about March 1.”

Haskew Lane prepares the box for placement in the cornerstone.

“A native of Etowah County, Jeffers attended Howard College and has done graduate work since becoming a pastor at Southwest Baptist Seminary in Texas. His pastorates include service at Collinsville at Hartford and in Andalusia. In interim periods, he served as secretary of the State Training Union in Montgomery and with the Baptist Sunday School Board in Nashville from which post he came to Andalusia.”

“The Jeffers have one daughter and four sons. They are Johnny, 15, a promising high school footballer, Jim, Davis, Jane, and young Dale Jeffers.”

“Mrs. Jeffers said at mid-week that the Auburn Baptist congregation had secured a former residence occupied by Major and Mrs. Grey Edwards and their family in Auburn. Mrs. Grey Edwards is the former Margaret Maddox of Andalusia. The Edwards family is soon to leave Auburn to go to Germany where Major Edwards has been assigned. Mrs. Jeffers said they were fortunate in securing the Edwards home as the new three-bedroom pastorium of the FBC in Auburn has been termed inadequate for the Jeffers family.”

January 27, 1958 – “Smiles abound as a shiny silver service is presented to Rev. and Mrs. John Jeffers at the mammoth tea staged on Sunday afternoon by the congregation of the FBC in Baraca Hall. The gift was in appreciation for the many services over and beyond the call of duty by the Jeffers couple and their family. Rev. Jeffers preached his last sermon as pastor of FBC on Sunday. The family moves to Auburn on Saturday. That’s when the tears will replace the smiles for the Jeffers youngsters.”

“Presenting the six-piece silver service to Rev. Jeffers is Attorney James Prestwood acting on behalf of the entire congregation. Looking on are Mrs. John Jeffers, the minister’s wife, and Mrs. Obie Jeffers, his mother. Not tall enough to see what is going on is (little) Dale Jeffers, the youngest in the Jeffers tribe of five children. Cliff Moulton who snapped this picture has other photos of the entire family including all of the children.”

As we continue to REMEMBER WHEN each week, there will be more to follow on this FBC history. The new and upcoming pastor of the First Baptist Church, Kevin Wilburn, his ministry to begin February 19, 2018, has asked to be familiarized with some history of the First Baptist Church. He has an interest in the heritage and history of FBC. Many of you readers who have been around here for a number of years know that the old Baptist Church begun in 1905 was completed in 1911 and dedicated in 1914 was located behind the courthouse just off North Court Square where a parking lot is now situated. According to the minutes of the Covington Association it was organized around 1848 as “The Missionary Baptist Church of Andalusia.” The historic Magnolia Cemetery lies close behind. The church had continuous growth by the mid 1950s and needed a larger and more modern church building with adequate parking. The courthouse likewise at that time needed more parking space. The church leaders chose a lot beside the 1926 pastorium on the main street in a residential area.

The Baraca Hall on Crescent Street now owned by the Covington County Commission and used in recent years as offices is still standing but currently unoccupied. It served as a church fellowship hall, Sunday School classroom, and civic meeting hall prior to the construction of the Scherf Memorial Building. Its simple Mission Revival facade is a reminder of Spanish architecture reminiscent of the public square of Spanish plaza design, the Montezuma Trading Post days, and the Conecuh River route that led to Pensacola when it was part of Spanish Florida. Andaluc’ia or Andalusia? Suggested possibly by someone of Spanish influence – it is a grand name for the “new site” that was established up the hill around 1845!

It is certain that by the time the city square and the streets were drawn out and businesses and storefronts began to be established, here came all those saloons and whiskey parlors! The town scene closely resembled a cowboy town based on old photographs housed at the Three Notch Museum! Some citizens back then probably gathered together and came up with, “What our town needs are some churches!” Thus, the beginnings of the Missionary Baptist Church.

So here we are some 60 years later (1958-2018) from when the cornerstone was installed with all of that history. Is there a certain time frame that an organization has to wait to open the cornerstone? What a treasure of information there is in that copper box!

Sue Bass Wilson (AHS Class of ’65) is a local real estate broker and longtime member of the Covington Historical Society. She can be reached at suebwilson47@gmail.com.