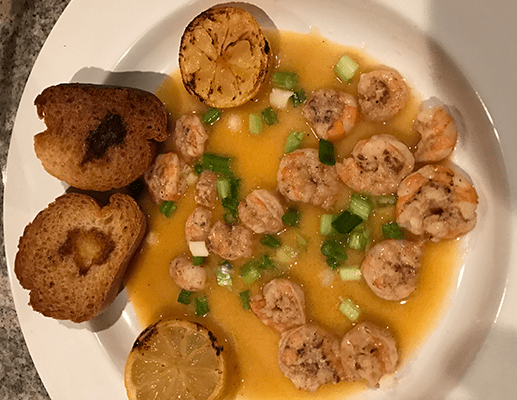 It is still carnival time and Mardi Gras is this coming Tuesday and definitely a time for decadence. The holiday is as associated with drinking and debauchery as it is with feasts and king cakes. Who can blame revelers, since come Wednesday it is the start of the Lenten season: 40 days of penance and self-denial.

I was reading in an old issue of The Local Palate about a Mardi Gras brunch and the barbecue shrimp recipe caught my eye. I am a big fan of barbecue shrimp and have always used the recipe from Paul Prudhomme’s Louisiana Kitchen Cookbook. This recipe is from the chef of Cavan (had never heard of it before), a restaurant on Magazine Street in New Orleans. I think this chef has moved on, which happens a lot, but this was his take on barbecue shrimp. I think the secret of good barbecue shrimp is making a shrimp stock (which I did) since just water does not cut it in a sauce. This recipe has only 1 tablespoon of butter and I remember using at least 6 or more in my old recipe, so perhaps this is much healthier. (But then I only use grass fed butter.)

So if you are having a Mardi Gras party try this shrimp recipe. You can always buy a King Cake!

From The Local Palate Magazine, 2016.

24 large, whole shrimp, peeled and deveined (save the heads and shells)

3 lemons, 1 peeled so all the pith is removed

1 (12-ounce) can beer (avoid stouts or anything too fruity)

Salt and pepper to taste

Loaf of crusty bread, cut into large slices and toasted

In a large, heavy bottomed saucepan, heat 1 tablespoon of oil over medium-high heat until oil starts to smoke. Add shrimp shells and heads and sauté until pink, 5-6 minutes.

Add garlic, peeled lemon, peppercorns, and 2 rosemary sprigs. Stir and continue to cook another 5 or 6 minutes. Add beer and stir, being sure to scrape up any browned bits from the bottom of the pot. Cook until reduced by half.

Add water and reduce heat to low. Simmer for 30 minutes. Allow liquid to cool slightly, then strain through a fine strainer. Reserve stock and discard shells.

Cut unpeeled lemons in half and lightly season with Old Bay.

In a small nonstick pan, heat 1 tablespoon of oil over medium-high heat. Carefully place lemons cut side down, then sear for about 1 minute or until the lemons start to caramelize. Remove from pan and reserve until ready to serve.

In a large bowl, season shrimp with salt, pepper, and Old Bay. In a large sauté pan, add remaining tablespoon of oil and heat over high heat. When oil begins to smoke, add shrimp and sear on both sides. Add remaining rosemary sprigs and sauté lightly for 30 seconds. Add enough shrimp stock to partially cover the shrimp. Cook until stock is reduced by half. Reduce heat to low and add butter. Whisk to combine. To serve, divide shrimp and sauce into four bowls. Garnish each serving with green onions and a brûléed lemon and serve with toasted bread.