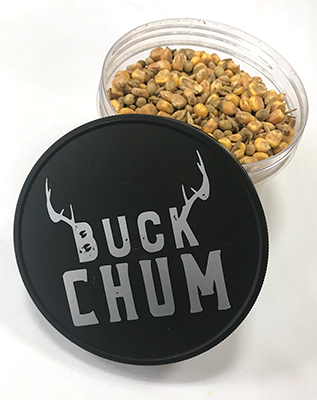 Custom Collars has been working on the roasted mix in Buck Chum for several years, but only branded it for marketing this year. Michele Gerlach/Star-News

Custom Collars, the Opp company that began as a manufacturer of custom dog collars, has a new niche product that is getting lots of attention.

Think of it as roasted snack mix for deer.

“The energy they get is like us drinking an energy drink,” Justin Messick of Custom Collars told the Andalusia Rotary Club Tuesday.

“This is the first year we’ve branded Buck Chum and put it out there with a logo,” Messick said.

Messick said that, while developing the mix, they first included peanuts.

“We had a game camera that showed a raccoon raking all of the mix out of the feeder and picking out the peanuts,” he said. “That’s when we changed it.”

Messick said the developers found when they began using the mix, they saw more bucks on their property.

“We couldn’t say that, because we just knew what was happening on our plots,” he said. “But everybody who has used it says the same thing.”

Messick said that in addition to attracting dear, the roasted grain mix increases the amount of digestible protein.

“The roasting process doubles the amount of digestible protein,” he said.

“We’ve been fooling with this for about three years, but this is the first year we’ve actually branded it,” he said.

At present, it is available directly from Custom Collars in Opp, from the Florala Pharmacy, and from Old Gin Creek in Brantley.

“It’s really taken off more than we expected,” he said. “I think we’ll need bigger equipment for next year.”