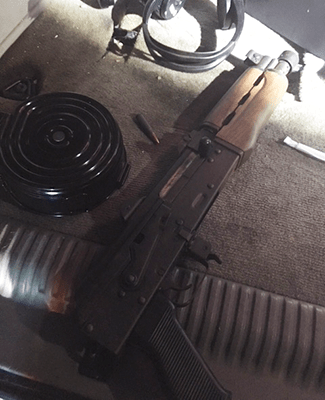 A Conecuh County man out on bond for attempted murder in Evergreen was arrested in Covington County Wednesday night after officers found him in possession of numerous weapons during a routine traffic stop.

Deputy Artis Ezell was working an overtime grant from the Alabama Department of Economic and Community Affairs Traffic Safety Division Wednesday when he stopped a vehicle on U.S. 85 west of River Falls for speeding.

. During his overtime shift Ezell did stop a Vehicle on Us Hwy 84 West of River Falls for speeding. He made contact with Mitchell Gandy From Evergreen Alabama.

During the stop he determined that the driver, Mitchell Gandy of Evergreen, was out on bond for an attempted murder and was a violent convicted felon previously convicted of felony assault I in Montgomery.

A further investigation and a probable cause search of the vehicle revealed a Glock 19 9mm handgun beside Gandy’s leg tucked between the seat and the console. At that time Deputy Ezell arrested Gandy and secured the firearm which was fully loaded. Also Deputy Ezell located an Ak 47 with a 100 round magazine loaded and tucked inside of a baby stroller in the SUV.

Gandy was arrested and charged with certain persons forbidden to possess a firearm and placed in the Covington County Jail.

The case was turned over to the Covington County Drug Task Force.