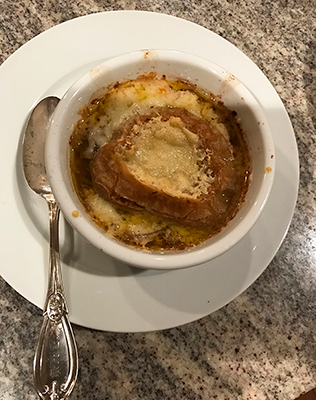 French onion soup is delicious! If you don’t see cheese spilling over the bowl you have not done it right.

Historians have found soup making as far back as 6000 BC. In 1765 a Parisian entrepreneur opened a shop selling a highly concentrated soup called restaurant (meaning restoring (something). The soup was advertised as an antidote to physical exhaustion. This prompted the modern use of the word restaurant.

Legend has it that French onion soup was created by King Louis XV of France when all he found in his pantry after returning from a hunting party was butter, onions, and champagne. He combined these and created the first French onion soup. This could be fact or fiction but it makes a good story.

Another legend puts the origin of onion soup in the kitchen of LaPomme d’Or in Chôlons-en-Champagne. This was the hometown of Nicolas Appert, the father of food preservation and inventor of canning, who happened to be working at the hotel one night when the Duke of Lorraine, ex-king of Poland, Stanislas Leszczynski, stopped on his way to the Palace of Versailles to visit his daughter Queen Marie, the wife of Louis XV. The Duke found the soup Appert had prepared so mind blowing, he left his chambers in his bathrobe and descended to the kitchen to demand how the soup was made.

Whatever is true, French onion soup is based on meat stock, onions, butter, and usually some wine and herbs. The dish was improved by the French with the adding of bread and cheese. The dish went through a resurgence of popularity in the United States in the 60’s due to an interest in French cuisine.

This soup is hearty and comforting! It does take some time since you must caramelize the onions, but so worth it. Just the thing for a cold winter evening!

6 medium-large Vidalia onions, peeled and thinly sliced (any sweet onion will do)

1 bouquet garni (a couple sprigs of thyme, parsley, and rosemary, and 2 bay leaves tied together with kitchen twine)

Salt and pepper to taste

In a large stockpot or dutch oven, melt butter over medium heat. Add onions, cover, and cook for 10 minutes. Remove lid and cook for another 40 minutes, stirring frequently until onions are lightly browned.

Add stock and bouquet garni and bring to a boil. Cover and simmer over low heat for about 40 minutes. Remove bouquet garni. Add cognac or sherry and cook for another 10 minutes uncovered. Season with salt and pepper.

Preheat the oven to 425 degrees. Divide soup into six oven-proof bowls. Place a slice of bread on top of each soup bowl and divide cheese evenly among each serving.

Bake bowls on a baking sheet in middle of oven for about 10 to 12 minutes or until cheeses is bubbling and golden brown. Serve hot.