River Baldwin had a big night as she led the Lady Eagles to a victory in the South Regional opener. 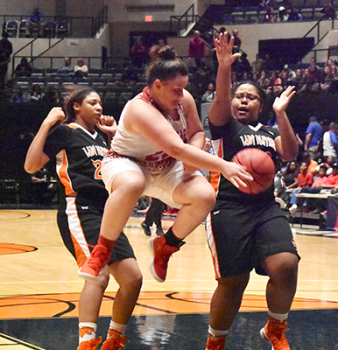 Amy Kate Bulger dishes off a pass under the basket. 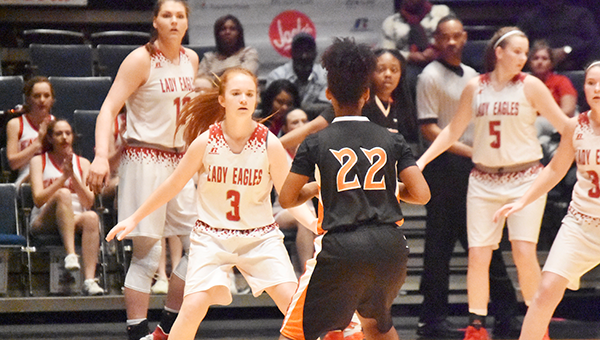 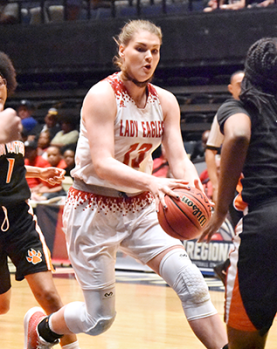 River Baldwin drives into the lane and prepares to shoot.

The Pleasant Home Lady Eagles are heading to the Class 1A South Regional finals after knocking off Marengo 55-31 on Friday night in the opening regional match in Dothan.

Pleasant Home grabbed the lead to start the opening period as River Baldwin grabbed a couple of offensive rebounds before putting one back in for 2-0 advantage.

Marengo answered right back with a bucket to tie the game.

The Lady Eagles followed with a free throw from Amy Kate Bulger.

After getting a stop on the other end of the floor, Baldwin dished the rock down low to Allie Garner who put in basket for a 5-2 Pleasant Home lead.

Marengo trimmed the Pleasant Home back down to one point with a running jumper.

The Lady Eagles responded with Hope Gunter dropping in a layoff off of a give-and-go.

Baldwin finished off the scoring in the opening period for the Lady Eagles with a free throw.

At the end of the first period, Pleasant Home was on top 8-6.

Opening up the second period, Baldwin was fouled and proceeded to hit both free throws for a 10-6 Pleasant Home lead.

Marengo wasn’t going away and back-to-back buckets tied the game 10-10.

Pleasant Home got the ball to Baldwin on the ensuing drive and she drew a foul as she dropped in a layup.

Baldwin hit the free throw to put the Lady Eagles up 13-10.

The Lady Eagles’ next basket came when Rae Rae Coleman swiped the ball from a Marengo player and turned it into a fast-break layup.

Baldwin followed with a layup to put the Lady Eagles up 17-11.

Moments later, Baldwin knocked down another basket and was fouled in act of shooting.

The Lady Eagles forced missed shot from Marengo and Bulger scooped up the ball as she sprinted down court.

It looked like Bulger was going for a layup, but at the last moment she passed the ball to Coleman under the basket for an easy bucket.

Another bucket from Coleman and then a free throw from Garner put the Lady Eagles on top 26-12 at halftime.

Baldwin got the scoring started for Pleasant Home with a free throw and then Gunter dropped in a layup to give the Lady Eagles a 29-14 lead.

The Lady Eagles continued to stretch their lead as Baldwin converted another and-one opportunity.

Gunter followed with a jumper that put the Lady Eagles up 33-14.

Pleasant Home got things going in the third period with a quick jumper from Gunter.

Baldwin then scored three-straight baskets to put the Lady Eagles up 51-23.

The Lady Eagles got baskets from Baldwin and Gunter to go up 55-29 late in fourth period.

“I enjoy being able to create opportunities for my teammates to score,” Baldwin said. “At times, I feel like I really just need to motivate them to be more confident in themselves. In the past, I kind of freaked out a little because I feel like everything is on my back. If we make a bad play, or I miss a shot, it’s all on me. I know now that if I just work as hard as I can to create opportunities and share the ball, it’s not all on me. We are a team and everybody is equal.”

The Lady Eagles will take on Linden in the Class 1A South Regional championship on Tuesday at 4:30 p.m.

“I know we were prepared to play, but we came out a little tight,” Pleasant Home head coach Tony Wilson said. “We didn’t capitalize on some opportunities in the first quarter and maybe even the first half. We loosened up a little bit and got some things rolling. Once we started getting this going and the wheels going a little bit, things started taking shape. I was more proud of the way the girls stepped up and played defense.”