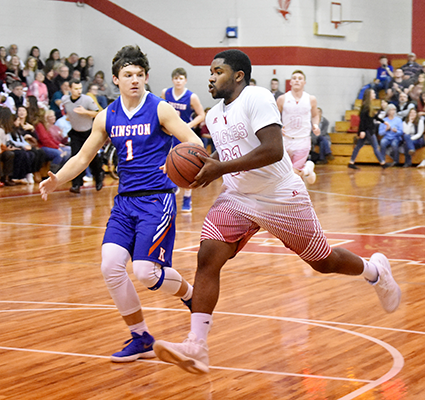 The basketball season ended sooner than the Pleasant Home Eagles would have liked, but head coach Troy Turman said he was proud of the way the team played.

“It was a rough year,” Turman said. “The kids battled all season. We battled injuries early on, and then we battled with finding our identity, but the kids never quit trying.”

Turman said that they realized early that they needed to change the way they played.

“We realized quickly that we weren’t the same kind of team as we were last year,” Turman said. “Last year, we shot well from behind the 3-point line, but this year we struggled with that. The kids battled and bought into a style of play.”

Around mid-December, Turman said, the Eagles turned a corner.

“About the time of the Red Level Christmas tournament, we kind of found ourselves,” Turman said. “Including that tournament, we went 10-4 the rest of season. We finished the season with a record of 15-13.”

It was the team’s desire to adapt as needed that Turman felt was the biggest part of the season.

“Our ability to change was great,” Turman said. “We changed the way we played because we didn’t have the right players for what we were doing. After Christmas, we were able to get some really good wins. Even when things weren’t going the way we wanted, the kids continued to do what the coaches asked them.”

The Eagles’ season came to an end in the opening round of the Class 1A, Area 2 tournament when they lost a low scoring affair to Houston County.

“Honestly, going into the game we didn’t have the plan of holding the ball like we did,” Turman said. “We did that in case they ran a box-and-one on Robert (Scott), but they just sat back and never came out on us for three quarters. We had numerous opportunities to go ahead, but we just couldn’t score. The kids then got frustrated when we missed two free throws late, and after that we turned the ball over. The kids have nothing to hang their heads about for that game. Houston County is a good team that is still playing in the playoffs.”

With the season over, Turman said he was proud of his players.

“I’m very proud of the way the guys played this year,” Turman said. “Those six seniors gave it everything they had.”