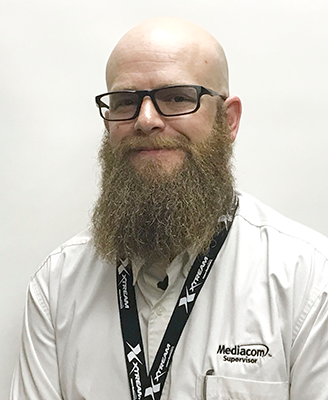 “Ultimately, it means that I am the first in the chain of command over a group of technicians,” he said. “I lead a group of guys to be the best technicians they can be.”

Gurley, who with his wife, Heather, is relocating to Andalusia from Milton, ha been in the telecommunications field for 19 years. Previously, he worked at AT&T for 14 years in Birmingham. He moved to Florida five years agon and said he stumbled into a Mediacom job.

“It thought, ‘I will try it and see how it turns out.’ He said. “It’s the best company I’ve ever worked for. It hasn’t lost site of the people who work for them, and it feels like a family business, if maybe a large family business.”

Gurley is a self-described military brat who spent half of his childhood in Germany.

“I never found a place that feels like home to me,” he said. “But as of Saturday afternoon sometime, I’m moving to Andalusia.”

Gurley said every day is its own day in his new job.

“I like that every day is different; it’s a challenge; a puzzle.”

But technical work is also customer service, he said.

“You get to spend time in a customer’s home,” he said. “As a technical individual, you are still a customer service rep. When customers let you in, you can build rapport and trust in the interaction.

“That’s a lot of fun sometimes,” he said. “But it obviously has challenges.:

He said telecommunications is a fascinating industry that changes every time you blink.

And while Mediacom is often thought of as a cable company, Gurley is quick to point out it’s a communications company.

“We’re also a phone and Internet company,” he said. “People rely on us communications. It’s very rewarding when get it right.”

Gurley said if he didn’t believe in what the company is doing in Andalusia, he wouldn’t be moving here.

“I want to live here, eat here, and shop here,” he said. “We both want to be a part of the day in and day out of what Andalusia is, so we can both say we are a part of this town. We look forward to being a part of that. “

He’s an avid motorcycle enthusiast whose hobby is to ride his Harley as many miles as he can.

He was named “Mediacom’s top technician” for 2017. The company wide, national award is based on the customer satisfaction scores each tech earns.