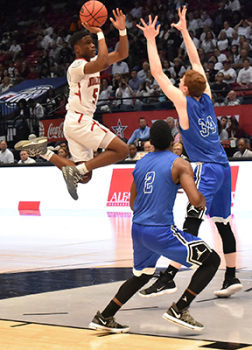 BJ Anderson goes up for a floater. Josh Dutton/Star-News 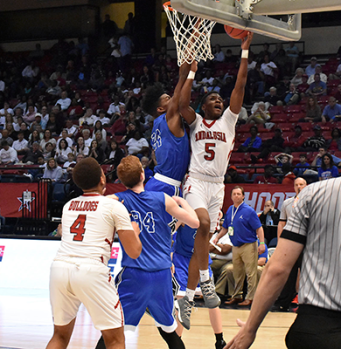 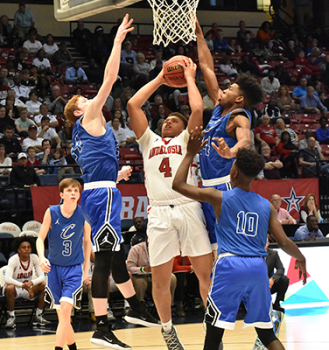 RJ Drish is fouled hard as he goes up for a shot. 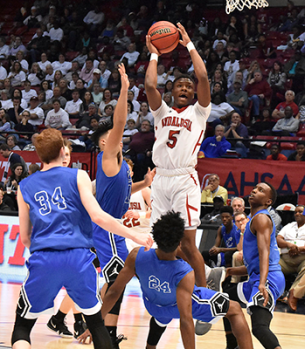 BJ Anderson had to fight through arms, legs, hands, feet and bodies all night, but rarely drew a foul. 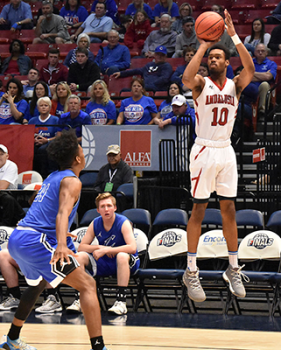 Trey Wilkerson fires up a 3-pointer. 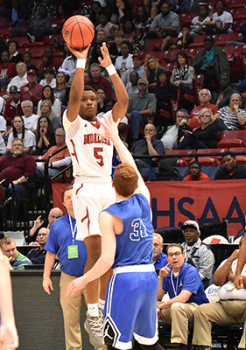 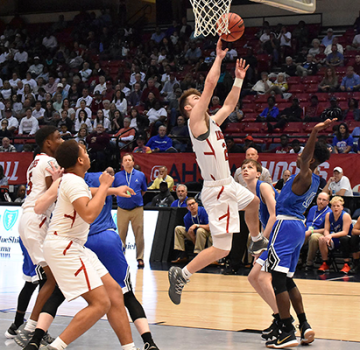 With 45 seconds left in the game, Andalusia was within 2 points of a trip to state finals, but fell to Cordova

The Andalusia Bulldogs saw their season come to an end when they fell to Cordova 46-39 on Tuesday night in the Class 4A Final Four in Birmingham.

Andalusia got on the board first when Keaun Samuel grabbed an offensive rebound and put it back up for a bucket.

After both teams missed a shot, the Blue Devils got the on a 3-pointer from Kam Cooper.

Ethan Wilson then drew a foul from Cooper, but manage to hit just one of his two free-throw attempts.

The Blue Devils took back the lead when Issac Chatman was fouled while making a basket. He would miss the and-one opportunity, but Cordova was up 5-3.

Andalusia tied the game back up moments later when Roosevelt Weaver dropped in a floater.

Chatman and Jayce Willingham then took charge for Cordova as they built a 13-5 lead going into the second period.

B.J. Anderson got things started for the Bulldogs in the second period with a jumper from the top of the key.

Willingham answered back and then a 3-pointer from Chatman put Cordova up 21-7.

The Bulldogs dug into the lead when R.J. Trish buried a 3-pointer from the corner.

Anderson followed with a jumper, but a 3-pointer from Willingham had Cordova on top 24-12.

Andalusia finished off the scoring in the second period with a bucket from Trey Wilkerson.

Cordova opened up the third period with back-to-back baskets from Chatman and Willingham.

The Bulldogs made a little charge in the in third period started by a 3-pointer from Wilkerson.

Wilkerson then through down a big dunk for the Bulldogs.

Wilkerson stayed strong when he hit another 3-pointer to cut the Cordova lead down 35-25.

Anderson finished off the scoring in the third period as the Bulldogs trailed 35-27 heading to the final period.

Anderson got he scoring started in final period with a layup and then a pair of free throws from Wilkerson left the Bulldogs trailing 35-31.

However, back-to-back-to-back baskets from Cordova pushed the lead back up to 41-31.

Andalusia continued to fight with a bucket and a 3-pointer from Anderson to cut the score to 41-36.

Weaver then put the Bulldogs within striking distance as he hit a 3-pointer to make 41-39 with 45 seconds left in the game.

Cordova finished off the game with free throws and the Bulldogs were unable to finish the comeback.

“I’ve been doing this for 27 years and it’s been 16 years since I’ve been back at the Final Four,” Andalusia head coach Anthony Clark said. “Early in my career, we had five teams that made it in seven years and I thought this was easy, and the Lord humbled me. So for 16 years it’s been a journey to get back here. About 22 months ago I was hired at Andalusia, and got the opportunity to coach this great bunch of young men. I’m just grateful for the opportunity to be back here and to bring these guys. We played a great team today. Hats off to team. In our style, we dug ourselves a hole and couldn’t quite get out of this one. I’m still tickled to death at our resilience of our kids and the spirit they played with. I told our players at halftime, there is a team I would rather be down with then you guys.”

Anderson led the Bulldogs with 15 points and Wilkerson came in with 10 points.

“They played great on defense,” Anderson said of Chatman and Willingham. “Those guys are good players. Shout out to Cordova for winning. I just can’t get over this. They are a good team.”