Trawick got his start shining shoes in 1950s 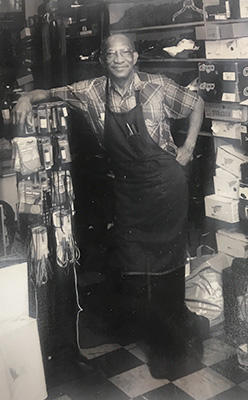 In the 1950s, Andalusia was a bustling town where James Brown, Elvis Presley and Hank Williams tunes could be heard floating through the wind. In 1951, a young African American boy was hired at Brooks Shoe Shop on the square to work as a shoeshine boy.

Mr. Hilry Trawick was that young boy shining shoes who worked his way up to be the first African American to own a business on the square.

“Mr. Pete Brooks hired me as a shoeshine boy back in 1951,” Trawick, now owner of Brooks Shoe Shop, said. “I learned everything I know from that man.”

Trawick bought the shop from Brooks in 1974. The state of Alabama was still struggling with integration in that time so business for Trawick was a little tough.

“When I bought the shop, Mr. Brooks told me one thing, to make sure not to change the name,” Trawick said. “White men knew Mr. Brooks and would still come in if they still thought that he owned it so I never changed the name.”

Trawick is not only known for his low prices and his handiwork with shoes, but also for being a honest and nice man.

“I keep people coming in the door because I try to be nice and honest to everyone that comes in,” Trawick said, “If you treat people right they will always come back.”

With the younger generation of African American children growing up, Trawick is worried that they will be complacent.

“This is definitely a different generation than when I was growing up,” Trawick said. “The kids just don’t want to work. If I could say anything to them I would say they need to get a little motivation in them and start working.”

Trawick has had some help running the store from his wife, Betty Trawick.

“She is amazing. She has always helped me and supported me no matter what,” Trawick said.

In his spare time, Trawick still works harder than ever.

“Man, when I finish here, I just go home and keep on working,” Trawick said. “I’ve been working all my life so there is no reason to stop.”

Trawick has no plans on retiring any time soon, but has made little changes to his hours to help out.

“I think when I changed the hours to where we are closed on Mondays really helped me,” Trawick said. “I mean I’m not getting any younger, but as long as I’m feeling good, I’m going to work.”