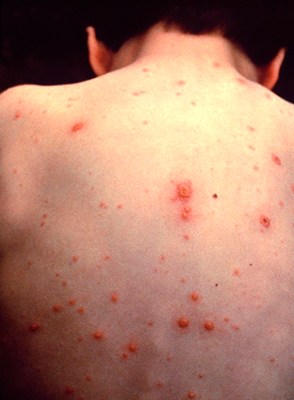 Although the number of outbreaks of chickenpox since the vaccine has been introduced has gone down, local pediatrician Dr. Bhagwan Bang says that there is an outbreak in Covington County.

“In the last few weeks I have seen an increase in the number of patients that have chickenpox,” Bang said. “I have checked with the Centers for Disease Control and Alabama Public Health and they have both confirmed that there is an outbreak in Covington County.”

The range of ages that he has seen is infants to four year olds.

“It usually starts out like an insect bite,” Bang said. “Then (the first blister) it will crust and blister, then you will see it spread over the extremities.”

Bang said that if the child has been vaccinated twice in his or her lifetime then he or she should be 90 percent immune to the chickenpox virus. Most vaccinations occur when the child is 12 to 15 months and then again when they are 4 to 6 years old.

“The most important thing is to make sure that people are getting their kids vaccinated,” Bang said. “Kids that have not been vaccinated stand a 90 percent chance of contracting the virus.”

Few adults are seen with the chickenpox virus, because they were vaccinated as a child, but people who work in public places such as a daycare, nurses office at a school, or a teacher, still need to be cautious about contracting the virus, Bang said.

“The chickenpox virus is extremely contagious and spreads rapidly once it infects a child,” Bang said. “I cannot reiterate it enough that every child needs to be vaccinated.”

According to the U.S. National Library of Medicine if someone in your family has chickenpox, the following precautions may help lower the risk of infection: