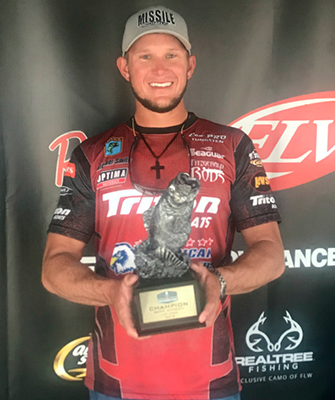 Paxton native Michael Smith has been fishing all of his life. Last weekend, he won $4,956 from his hobby.

Andalusia’s Michael Smith has been fishing his entire life and is now winning tournaments on the professional level.

For the tournament there was a five-bass limit and he weighed in with 17 pounds, 14 ounces.

Smith said he started fishing because his parents were big fishers. They drove him to the many different places he has gone to fish, and always supported him, he said.

Smith grew up in Paxton, Fla., and graduated from Paxton High School. After graduating, he earned an electrical engineering degree from the University of West Florida. He’s lived in Andalusia for the past three years, working at PowerSouth.

A typical tournament day involves waking up before daylight, driving out on the water at daylight, and fishing all day until 3 p.m.

“It’s usually an all day thing,” Smith said. “You go out there and have a good time, search for all the right spots and then weigh your fish. If things go your way, then you go home with a check.”

“I focus on what I think the bigger fish are going to bite and where they are,” Smith said. “I usually throw top water bait because it’s fun to throw, so I hunt out situations where I can use that bait.”

Smith has participated in hundreds of tournaments since he was 15, and he said that he has won at least 60-70 of them.