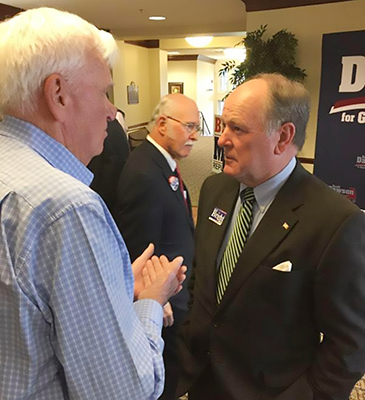 Bobby Bright believes growing up as the son of sharecroppers was good training for the campaign trail.

“Daddy was a sharecropper,” he said Tuesday, when he stopped by the newspaper office just before a GOP forum in Andalusia. “I learned to work hard and had a reputation as a cotton picker. I could fill up my sack in just a little while. All the other kids were trying to waste time and play.

“I had 13 brothers and sisters. I had to learn to be quick. We had to work. I learned to get to the table quick, then I ate quick and left quick. It has helped me as a politician. I can still eat quick, take time to talk to folks, and move on to the next thing I have to do.”

Like many who worked on shares with landowners, Bright’s family was taken advantage of.

“It’s why I love being involved and helping people,” he said. “I’m just a country boy.”

But the country boy who grew up so poor that his father wired his brogans wired together to make them last made it to town. Bright took a metalworking job to earn money for college, and graduated from Auburn with a political science degree in 1975. He later earned a master’s degree in criminal justice from Troy, and began a career as a corrections officer. He has said it was while working in the prison system that he was affected by the many young people entering the penitentiaries, and decided to go to law school. He earned his juris doctor in 1982, and practiced law for 15 years before entering politics.

As mayor of Montgomery, a non-partisan job, he balanced the city’s budget and created a $30 million rainy day fund. He also began revitalization work downtown, including construction of the Montgomery Riverwalk Stadium.

He was elected to Congress in 2008 as a Democrat, and served two years before losing a narrow race to Martha Roby in 2010. Now, he’s challenging Roby as a Republican.

Questioned about his two years as a Democrat, Bright points to his conservative voting record, and his record as a fiscal conservative.

“When I was in Congress as a conservative Blue Dog, I lobbied for a balanced budget amendment,” Bright said.

Republicans who agreed with the idea of a balanced budget wouldn’t support it because he was a Democrat, he said.

“One of my key tasks when I’m elected will be to introduce my balanced budget amendment bill,” Bright said. “Hopefully as a Republican, I can get further along.”

Bright said the issues he considers the biggest for the campaign aren’t new issues.

“We’ve got to quit wasteful spending,” he said. “There’s still a lot of that going on. Until the law requiring Congress to balance the budget, it will continue.

“I’ve always made the promise, I would never vote on new taxes,” he said. “We need to prioritize what we spend them on.”

“We’ve got to make sure there is a labor force for farmers, and give immigrants a viable pathway to become citizens,” Bright said. “I don’t condone people coming through in droves. I live my life by the letter of the law, and expect other people to do the same.

“Trump is wanting to build a wall. He needs to tell us how he’s going to do it,” he said. “If he can convince me the wall is what we need to curtail illegal immigration, I can support it. We have to have an open-minded approach.”

The country also needs a common-sense approach for addressing the citizenship of the children of immigrants who entered illegally, he said.

“I think they’re here at no guilt of themselves,” he said. “We’ve got to come up with a solution. You can’t kick them out. They’re here. If they are contributing to society, to the military defense for our country, and jobs here in America, let’s find a solution and make them legal.”

Bright said the difference between him and his successor is Congressional committee assignments.

“She got off the most important committees in Congress, as far as our district is concerned – the powerful Armed Services Committee and the needed and necessary Agricultural Committee,” he said. “Farming employs more people in Alabama than anything else. We have two military bases in or very near to District 2. We have a lot of veterans who have retired here.

Roby serves on the House Committee on Appropriations and the House Judiciary Committee, as well as several subcommittees.

Bright said services on Appropriations “elevates your popularity in Washington, D.C., but is a step in wrong direction, as far as I am concerned.”

“I would get back on those committees, and protect the military bases and farmers here in Second District,” he said.