Yesterday, students across America participated in the National Walkout Day, where thousands of students walked out of their classrooms and marched down streets for 17 minutes in memory of the 17 students who died in the school shooting Parkland, Fla., last month. The walkout was intended to pressure Congress to approve gun control legislation. 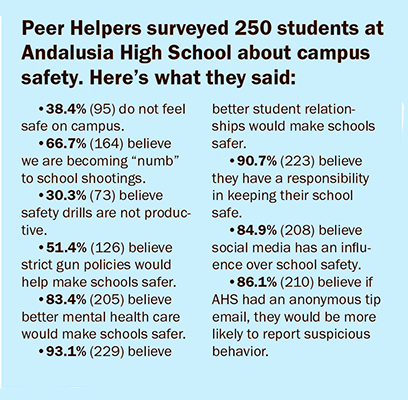 After taking their idea to Charlotte Spurlin, Peer Helper director, they shaped their idea into what they are calling a Students For Safer Schools March planned for Sat., April 14, at 9 a.m.

“Jonathan and I were talking in class about something that we could do,” Woodard said. “But we didn’t know how to make it happen or how to get it accomplished. That is when we brought the idea to Mrs. Charlotte Spurlin to see what she thought of our idea.”

Woodard and Weed wanted to model what students were doing for National Walkout Day, but wanted to focus on the bigger picture instead of just gun control.

“There are multiple reasons why kids are doing this type of thing,” Woodard said. “It starts in the home and it starts with the relationships that we have with all of our peers. We wanted to make an event that encompassed all of these issues and not just one.”

Spurlin said that this event is entirely student led and she said she couldn’t be more proud of her students for stepping up.

“It affects the students the most,” Woodard said. “So it needs to be our responsibility to make a change.”

The students didn’t stop at just planning an event. They have gone into classes and conducted surveys, discussed with other peers how they feel about the school environment and are using the data they gathered to hopefully work on ways to make the school safer.

“The students really took advantage of this,” Spurlin said. “They participated and took it very seriously.”

The march will start at First Baptist Church, go down to the courthouse then circle back around to city hall, where there will be a presentation by Trippy McGuire, retired district judge, and several representatives from all the schools in the county. During the presentation, all of the representatives will speak on the data and concerns their students have about school safety.

“I’m really glad to go out into the community and bring change to Covington County,” Peer Helper Baylee Robertson said.

AHS students are proud to host this event because it is something that no other school is doing.

“It shows that we aren’t going with the flow like everyone else,” Mandy Smith, a F.O.C.U.S. group member, said. “It’s going to show that we actually care about our students.”

Spurlin has invited all of the county schools to participate in the march, but so far only Red Level High School has responded.

Along with the event, the AHS Peer Helpers are selling T-shirts for the march. The proceeds from those shirts will go to Operation Birthday Wish, a community service partnership with the Alabama Department of Human Resources, which provides a birthday present and book for DHR foster children in Covington County.

The shirts are $20 and are available for anyone. The last day to order shirts will be Thur., March 22.

For more information contact Spurlin at charlottespurlin@gmail.com or call 334-222-7569.