The travelers prepare to be “dipped in the River Jordan,” as Mattie Freeney described the experience.

The Sea of Galilee

At the airport in Tel Aviv. 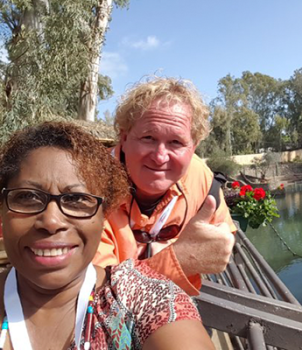 Pastor John Hunt and Mattie Freeney at one of many historic sites visited. 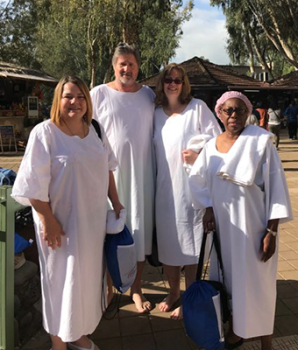 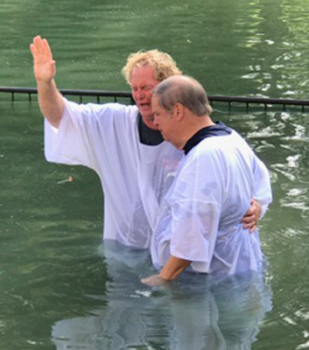 Pastor John Hunt prepares to baptize Pastor Homer Hutto in the Jordan River during a visit to the Holy Land. The river has a major significance in Judaism and Christianity. This is the site where the Israelites crossed into the Promised Land and where Jesus of Nazareth was baptized by John the Baptist.

A group of people from Covington County was able to walk where Jesus walked and see several biblical landmarks.

There were 16 people total including three pastors in the group that traveled to the Holy Land earlier this month, seven from Covington County – Dena Matlalcuatzi, Jerry and Angie Pettis, Reggie and Terry Davis, Mattie Freeney, and Pastor John Hunt – and 11 from Panama City. Pastor Homer Hutto from Panama City was the tour guide, leader and tour organizer. Hutto is the pastor at Bayou George House of Prayer in Panama City.

While they were there, Hunt and the group were able to visit several biblical places such as the tomb where Jesus was buried, Golgotha, the place where Jesus was crucified, and Mount Carmel. They also sailed on the Sea of Galilee.

“I mean you hear these stories and you preach them, but now they’re in living color,” Hunt said.

This was the first time that Hunt had been to the Holy Land.

“It was absolutely amazing,” Hunt said. “Mount Carmel was one of my favorite Bible stories growing up so being able to preach there is a dream come true.”

Hunt said that the people who went with him have come back with a rock solid belief in everything they have learned after seeing the Holy Land.

“There were three pastors that came with us, and they were also stunned at the beauty of the Holy Land,” Hunt said. “Everyone walked away from this trip with a solid belief in Christianity and Jesus Christ.”

A slight scare at the airport was not going to ruin Pastor John Hunt’s and several other people’s trip to the Holy Land.

After a flight delay for three hours in Tel Aviv, Israel, Hunt and his group was bound to miss their other flight in Istanbul, Turkey, to get them home in a timely fashion.

“We missed our plane home because of the flight delay,” Hunt said. “They were saying that it would take three days to get another flight and we did not want to wait that long to get home.”

Since the group did not have a boarding pass to get through security they were stuck in Turkey. The group was able to call home and get family and friends that were stateside to order boarding passes for them to be able to go home.

“A lot of people on Facebook over dramatized things,” Hunt said. “We never felt in danger at all, it was more of an aggravation.”

Hunt said that the main problem was communication with the airport staff and wanting to get home in a timely fashion.