2 ‘persons of interest’ sought in shooting 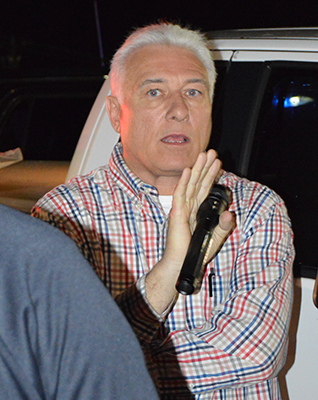 The Covington County Sheriff’s Department is looking for two persons of interest in their investigation of a Friday night shooting.

A couple was attempted to find a rural address on Falco Road where they were to purchase a camper listed on Craigslist. The man had gotten out of the truck near the wooden bridge on Falco when he was shot three times in the groin area. His vehicle also was struck three times.

The victim was able to get back in the vehicle and drive out. He stopped at Pleasant Home School where he was later airlifted to a Florida hospital. Monday afternoon, Sheriff Dennis Meeks said the victim’s injuries were not life threatening and he was scheduled to have been released from the hospital.

Robbery was the apparent motive, the sheriff said.

Meanwhile, on Saturday the department issued a BOLO (be on the lookout) for a white Chrysler 200 four-door, and two male subjects, Jake Cox and Johnathon Cox.

Meeks said late Monday that the vehicle has been located and impounded, but declined to say where the vehicle was found.

“We would like to talk to the two young men,” he said, adding that they are local residents.

Star-News archives show that Jake Alan Cox was one of three people arrested in January when a good Samaritan interrupted a burglary of the Andalusia Armory and held the suspects at gunpoint until law enforcement arrived.

Cox, 18, was charged with burglary third, theft of property second and criminal mischief third in that case. The other two suspects in that case were juveniles.