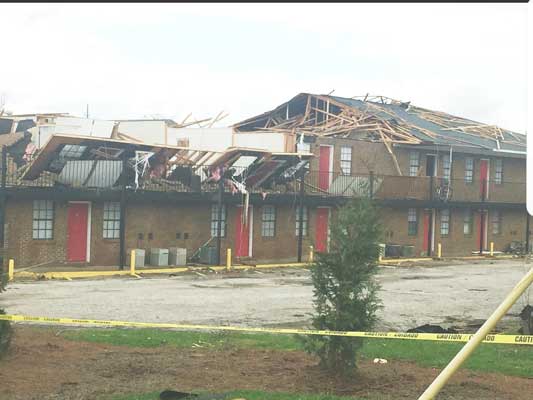 Tornadoes and baseball size hail stormed through Jacksonville State University on Monday, leaving several Andalusia locals worried about their children and their school.

Luckily, JSU is on spring break this week so very few students were on campus during the storm.

“It is a very sad and very bad situation,” Thomas said. “I was in Georgia, but several of my sorority sisters have lost their apartments.”

Thomas is apart of the Zeta Tau Alpha Sorority at JSU.

Thomas said that one of her friend’s boyfriend’s truck is in a tree and his apartment is completely destroyed.

Quantavise Stoudemire, a graduate from Opp High School and a JSU football player, was in Jacksonville when the storm touched down.

“I was in my living room trying to keep my little girl calm,” Stoudemire said. “I’ve never witnessed anything like this before, so I was pretty worried.”

Stoudemire has yet to receive any updates from the football team as to when they will resume practice.

This will be Stoudemire’s senior year playing for the Gamecocks and he has high hopes to play in the National Football League.

Mary and Judy Johnson, graduates of Andalusia High School, lived in one of the apartment complexes that was completely totaled, but their individual apartment was not damaged.

“I do know that the storm took out most of one of one side of the school,” Mary Johnson said. “JSU is going to have a lot of rebuilding in the next few months.”

Although Stoudemire, Thomas and Johnson did not suffer terrible damages, some students were not as lucky.

Andalusia High School graduate Luke Thrower’s dorm was completely wiped out by the storm. Fortunately, he was in Gulf Shores with his fraternity during spring break. His mother, April Thrower, posted a picture of the devastated Patterson Hall notifying everyone in Andalusia that her boys were indeed safe.

“I am very grateful that god protected them,” Thrower said. “It is very scary as a parent knowing that if he had been there, he might not have been able to walk away safely.”

JSU tweeted late Monday night, “Dear JSU family and friends: Our campus and our community were hit this evening by severe storms. It has only just become safe for university police to come out of shelter and they are out assessing the damage and going dorm-to-dorm checking on residents.”

“There has been significant damage tonight in parts of Alabama. We are sending state resources to those affected areas, especially to Jacksonville and Calhoun County. We will continue to monitor and respond to needs in other areas as needed. Our first priority is ensuring our people are safe. Please stay out of affected areas and let first responders do their job. I thank all first responders, EMA and Weather officials, and utility workers for their hard work trying to keep Alabamians safe.”

There is no news yet as to when JSU will reopen.