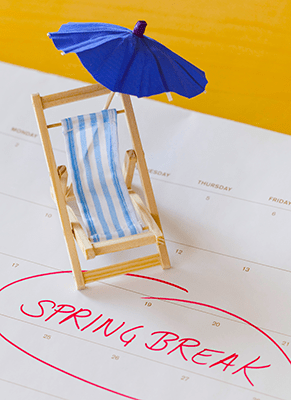 Emmy Rabren, a student from Straughn High School, plans to travel to the Bahamas.

“We will be there for five days,” Rabren said. “It should be a really fun time, I’ll be there with a lot of my friends and family.”

While Rabren is in a different country, Caleb Bennett and Adam Anderson will be playing baseball.

“Other than baseball, I’ll probably be sitting at home,” Bennett said.

Several other students from Straughn will be going to the beach in Panama City, with one celebrating her birthday there.

“I can’t wait,” Harrison said. “The beach is a perfect place to spend my birthday.”

At Pleasant Home School, several students will go out of the state to relax during spring break.

Lauren Gilford will spend it watching her sister play volleyball in Atlanta.

“I don’t mind watching Sara Catherine play,” Gilford said. “It gives me a reason to go to Atlanta.”

While one student is in Atlanta, two will be in Tennessee for the break.

Josh Ruth will hopefully be visiting family in Charleston, Tenn.

“I haven’t asked off at work yet,” Ruth said. “So we’ll see if they will give me a break.”

Carley Hunter, an eleventh grader from PHS, also will go to Tennessee.

“We don’t know where we are going yet,” Hunter said. “But either way it will be a fun vacation.”

Allie Garner will be working spring break at Camp Sunshine.

“I don’t mind it,” Garner said. “It’s better than having nothing to do.”

At Andalusia High School, a group of seniors will travel to Mexico on a cruise.

Mrs. Cavelle Jones will be one of the chaperones in the group.

“It started out as just an idea between good friends,” Jones said. “My son, Will Clark, asked his best friend and then the group kept getting bigger and bigger.”

With one group on the shores of Mexico, another group will be on the white, sandy beaches of Seaside. Jonathan Weed, Joy Ritter, Alden Wells and Clorissa Morgan will all travel to Seaside.

“It should be fun,” Ritter said. “It always is with this group of people.”

The weather forecast according to weather.com, shows that in Destin it will be partly cloudy all next week, with 20 percent chance of rain on Monday and Thursday and the average high being 74 degrees.

The Covington County Relay for Life will hold a raffle that will benefit the Hope Lodge in Birmingham. The raffle... read more