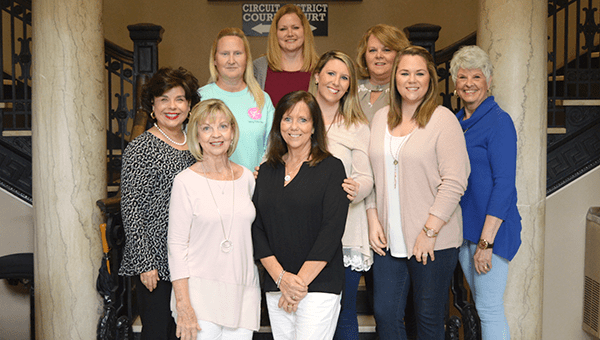 Pam Hutcheson, center front, is shown with her co-workers in the circuit clerk’s office.

Yesterday, the Covington County Circuit Clerk’s office had a retirement party for one of its longest working employees, Pam Hutcheson.

Now, 40 years later, she is ready to retire.

Hutcheson said that she plans to spend more time with her husband and grandkids.

One of her biggest memories of working at the circuit clerk’s office was when the courthouse had a bomb threat.

“I was the one who answered the phone,” Hutcheson said. “All the person on the phone said was ‘I just wanted to let you know that there is a bomb in the courthouse’ and then he hung up, so I just looked around and didn’t know what to do.”

Hutcheson said that she went to the judge and they immediately stopped the trial going on, evacuated the courthouse and worked on the problem at hand.

“We worked pretty fast and was able to get everyone out of the courthouse,” Hutcheson said. “The main thing I was worried about is if we left someone in the bathroom, because there are no intercoms in this building so we couldn’t announce for everyone to get out.”

“I have been here long enough to see people come and go,” Hutcheson said. “But the relationships I have made are irreplaceable, it’s a big family here.”

All of Hutcheson’s coworkers made it clear how badly they were going to miss her as the emotion came at the end of the party.